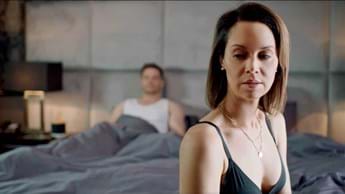 There’s no getting around it when it comes to Price family newcomer Robbie (André Lötter) and high-profile lawyer Sandra Stein (Shannon Ezra) “It’s lust at first sight,” says the actress. Sandra had flirty moments before the wetlands court case began in early February, pitting her and her employer Msizi Zulu (Siyabonga Thwala) against Robbie.

“Sandra is adept at compartmentalising her life. It’s what makes her a fierce, formidable opponent in court, so she can put distance between her personal life and her professional career.”

And while the pair are on opposite sides for the fight, and as Robbie tries to save a deal, “It’s definitely not enough to keep them from liking each other,” says Shannon. The moment their court clash is over, the pair will be in each other’s arms… and beds.

Hate the wait? Want to know what happens right now, or else? You can already get early access to the next episode of Legacy S2 on Catch Up via the DStv App or on your internet connected DStv Explora. And you’ll be able to see all this season’s action a day ahead of the rest of the country as you continue to watch Legacy via early access.

Not the boss of my bedroom

As Legacy’s legal counsel, Sandra works for CFO Msizi before lowly Robbie. And while Sandra and Robbie have kept their love connection on the lowdown during the case, there’s some cause for concern for Msizi.

“The moment he realises that Sandra isn’t behaving like the ruthless, cut-throat lawyer he knows her to be, Msizi questions her loyalty,” admits Shannon. But she adds, “Sandra is far too proficient at separating her work life and private life to let someone like Msizi get in her way. She lives in a bubble, and often she’s unaware of other people.” So, while Msizi has Sandra at his beck and call professionally, when it comes to her relationships, Msizi and his influence aren’t in the picture: Sandra will date who she wants, when she wants, says the actress.

The problem for Sandra now is that while she and Robbie are in the same bed, they may not be on the same page about where this romance is going. “It’s obvious that Robbie is attracted to Sandra. But he also finds her incredibly interesting and intriguing. He gives love easily as he wears his heart on his sleeve,” says André, hinting that it’s far more serious for Robbie than Sandra. “He sees this going far – marriage and kids, the whole suburban family living. He understands that Sandra is career-driven but he really has no problem being a househusband.” As for Sandra, Shannon is blunt: “They definitely have opposing views [on where this relationship is going]. But that’s what makes for exciting tension between them… and for our audience hopefully.”

And this isn’t the only love story steaming up Legacy screens this month. Liz (Reandi Grey) doesn’t know it yet, but Cupid’s arrow is going to strike her when she least expects it…

Card Link
Back to News
Local 12 September 2022
Legacy: The farewell