Legacy S2 | Watch it on DStv 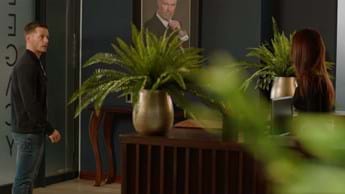 S1 of flashy fancy telenovela Legacy on M-Net (DStv channel 101) ended with Dineo Price (Kgomotso Christopher) pushing her stepdaughter, Felicity (Mary-anne Barlow), over the balcony following Felicity’s murderous confession about her father: she did him in. But when S2 starts on Monday, 20 September, the Price family will need to reunite and close ranks, because a newcomer is coming to them with a secret that could cripple them: he has reason to believe that he is Sebastian Price’s (Deon Lotz) heir.

Hate the wait? Want to know what happens right now, or else? You can get early access to brand new episodes of Legacy S2 on Catch Up via the DStv app or on your internet-connected DStv Explora. And you’ll be able to see all this season’s action a day ahead of the channel premiere as you continue to watch Legacy via early access.

André Lötter says that his character, Robbie, had never felt connected to his bar-owning dad, Jerry (who we don’t see on screen), but it’s still surprising when he finds out that he’s a Price. “Robbie was born out of wedlock and Jerry, who Robbie’s mom, Janet (Kate Normington), loved, made her promise not to tell anyone that Robbie wasn’t his son,” explains André. “Robbie has only known Jerry as his father and Jerry did his best to raise Robbie as his own son. But as much as Robbie loved Jerry, he has always felt this sense of disconnect and that something was out of place. With Jerry dead, Janet makes a confession that sends Robbie on a quest, and everything suddenly makes sense to him.” But is Robbie ready for the truth?

“Janet was Sebastian’s personal assistant 30 something years ago, and Robbie is the result of their affair,” explains André. “Once Robbie hears who his father is, he can’t actually stay with his [other] family out in the rural farmlands and bush. He immediately heads to the big city. He’s got all of these questions: what has he missed out on, where does he fit into the world, how can he start over now?” says André.

Now his character, a humble guy, is thrown into a world he doesn’t understand. And when he gets to Joburg, he’s going to come up against a formidable foe in Sebastian’s ex-wife, Angelique Price (Michelle Botes). Angelique has been through this before (Sebastian’s infidelity), before Sebastian even married Dineo. Angelique is now forced to watch another outsider come in and try to take away Sebastian’s legacy from her three daughters.

And Angelique is not the only person apprehensive about Robbie’s arrival. Of all the Prices, there’s one member who stands to lose more than anyone with Robbie in their midst. “Robbie is a Price. And he’s the first son of Sebastian – the heir ahead of Sebastian Price Jr (Anton Jeftha), Dineo’s son.”

Moving to Johannesburg comes with another change for Robbie because he’s a fish out of water in more ways than one: He’s not business oriented, admits André with a laugh. “He’s a jeep jockey. Robbie loves the bush and he’s led expeditions and safaris across Africa, up to Kenya. That’s his world, humble and Mother Nature. He’s going to have to get an office job now if he wants to fit in with the rest of the Prices. He hates it from the first second he walks into Legacy Investments.”

It’s not just the work environment that is different. Robbie is now interacting with a family that is powerful and ruthless. “And they won’t want him there. It’s going to be an interesting learning curve,” emphasises André who’s worked previously with his on-screen half-sister Reandi Grey (Liz Price) at 7de Laan. “I watched Legacy episode 1 and told myself that I need to work with Reandi again. A year later I was asked to audition and this kind of role, where you’re playing a character looking for his truth, you can’t pass up,” says the actor.

And Robbie won’t be the only newcomer adding to the Legacy drama, so stay tuned!

PS: If you're just getting into the show, you can binge Legacy S1 from the beginning on Showmax.