Watch select local and international shows ahead of their channel premiere on Catch Up via the DStv app or on your internet-connected DStv Explora. 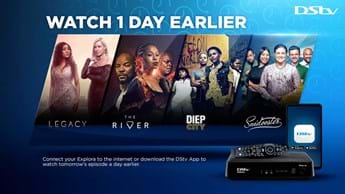 Have our local telenovelas got you hooked? Or, have you watched the first episode of one of our brand-new international series and can’t wait to see what happens next?

DStv has got you covered.

Now you can watch brand new episodes of Legacy, The River, DiepCity and Suidooster one day before the episode premiere. And you can get early access to the full Box Sets of brand-new international series like Cold Courage S1 and Hacks S1 directly after they premiere.

Plus, get early access to brand new episodes of Love Island UK S7 and Evil S2.

All you have to do is watch Catch Up via the DStv App or by connecting your DStv Explora or Explora Ultra to the internet. Once there, you’ll find a row titled ‘Early Access’ with shows you can watch before they broadcast on linear TV.

How does it work?

DStv will make the newest episodes of Legacy, The River, DiepCity and Suidooster available to customers one day before they broadcast on their respective channels.

This means that if you just watched the latest episode of The River on 1Magic (DStv channel 103) for example, you can head over to Catch Up on the DStv App or on your internet-connected Explora and watch the next episode immediately - before it premieres on the channel the next day.

We're giving you early access to your favourite telenovelas so you’re always one episode ahead of everyone else.

In addition to giving you early access to the latest episodes of your favourite telenovelas, DStv is also giving international series lovers access to full seasons of selected shows directly after the first episode premieres.

This means that if you’ve just watched episode 1 of Hacks on M-Net, you can head over to Catch Up on your DStv App or internet-connected Explora and binge the rest of the season from immediately after the episode ends! And you can do the same with Cold Courage S1 as well.

Did you enjoy Evil S1? You're in luck - M-Net will release eight episodes of Evil S2 directly after the first episode of the new season concludes on Wednesday 8 September at 22:31. You'll be able to binge episodes 1 - 8 on Catch Up immediately, then watch the remaining five episodes weekly when the show returns from production break.

For reality TV fans, we’re giving you early access to the full week’s episodes of Love Island UK S7. Switch on over to Catch up on your DStv App or internet-connected Explora directly after Monday’s episodes end to binge the next six episodes before everyone else.

It's just another way we’re helping our customers feel every moment of their favourite shows, in their own time.

To start with, you’ll get early access to Legacy, The River, DiepCity, Suidooster, Hacks S1, Cold Courage S1, Evil S2 and Love Island UK S7 but we will be adding more shows in the future, so keep an eye out for more titles with Early Access tag on their poster – and enjoy!

Customers can only get early access to new episodes of these shows by watching them on Catch Up via the DStv app or on a DStv Explora or Explora Ultra decoder that has been connected to the internet.

Customers will only receive access to the titles that are available on their package. For example, DStv Premium customers will receive early access to the M-Net titles exclusively (Legacy S1, Hacks S1, Cold Courage S1, Evil S2). The River (1Magic, DStv channel 103) and Suidooster (kykNET, DStv channel 144) will be available to DStv Premium and DStv Compact Plus customers.

The DStv App gives you choice and convenience, and now, it’s also the place where you can watch tomorrow’s episodes of your favourite local and international shows, today.

With the DStv App, you’re getting the online version of DStv where you can enjoy live TV and Catch Up on a variety of devices. We have apps for smartphones, tablets, Android and Apple TV, as well as selected Smart TVs and gaming consoles. Plus, you can download new episodes of your favourite shows on Catch Up and watch them offline at your own convenience – even when #ShedHappens!

To get early access to your favourite local and international shows, simply download the DStv app for free from the Apple, Android or Huawei app stores.

The DStv app is available to all DStv customers at no additional monthly cost (data charges may apply).

How to connect your DStv Explora to the internet

Connecting your DStv Explora to the internet unlocks a wider world of entertainment for you and your family to enjoy.

You’ll find so much more content – including more reality, doccies, kids content, sport highlights, box sets and early access to selected local and international titles – when you connect your decoder to the internet using an ethernet cable or DStv WiFi Connector.

Plus, if you’ve got the all new next-generation DStv Explora Ultra, you can connect to the internet easily using the decoder’s built-in WiFi feature.

For a step-by-step guide on how to connect your Explora to the internet, click here.