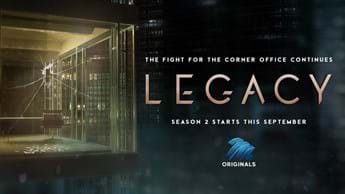 M-Net (DStv channel 101) has announced that the channel’s very first local telenovela, Legacy has been renewed for a second season and is set to hit viewers screens mid-September 2021.

“The manner in which viewers embraced Legacy as M-Net’s first telenovela made this whole experience wonderful, and we are indebted to our viewers who have gone on this rollercoaster ride with us,” Tshedza Pictures Executive Producers, Phathu Makwarela and Gwydion Beynon share.

The impressive, first-of-its-kind telenovela won a remarkable six SAFTAS for its first season, including Best Telenovela and the second season promises to be nothing short of exceptional.  A new family is introduced, enemies become allies and secrets from the past are resurfaced…because nothing can be hidden forever.

“As we move towards Season 2, we can promise viewers a rebirth of the series and a big expansion of the story universe which will allow us to tell more compelling and addictive drama,” Phathu and Gwydion conclude.

The second season also brings an array of talent behind the scenes. Krijay Govender moves into a Series Producer role, the dynamic directing team welcomes Zimkhitha Maseko and Christo Davids and the talented Thami Magqoki joins as the Director of Photography.

Legacy Season 2 will premiere on Monday, 20 September at 19:00 on M-Net (DStv channel 101). The series is also available to binge from the beginning on Showmax.

How to watch Legacy online