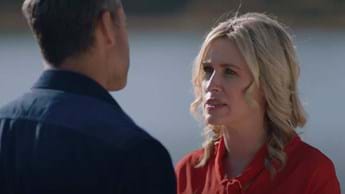 The truth is getting twisty again in local telenovela Legacy!

Darren’s (Gustav Gerdener) body has been fished out of the lake where it was disposed of by the women who killed him, Dineo (Kgomotso Christopher) and Felicity (Mary-anne Barlow) Price - but Detective Marco (Nico Panagio) investigation into Darren’s death is leading him closer and closer to the murderers!

So, what do you do to throw suspicion off yourself? Well, you cover your tracks and if all else fails - you need a scapegoat! And that’s exactly the realisation that Felicity and Dineo come to at the end of October.

Meanwhile, DNA results are under the spotlight as Elizabeth Price (Reandi Grey) reaches out to Robbie (André Lotter) to find out whether he is her half-brother or not. But Angelique (Michelle Botes) is going to make sure that there are no simple answers.

Don’t miss all of the underhanded action on Thursday, 28 October, which lays the groundwork for more skulduggery to come this November.

Can’t wait to see what happens next? You can get early access to brand new episodes of Legacy S2 on Catch Up via the DStv app or on your internet-connected DStv Explora. You’ll be able to see all this season’s action a day ahead of the channel premiere as you continue to watch Legacy via early access.

Detective Marco is getting closer. . .

There is no denying the situation Felicity has gotten herself into is messy. She has fallen head over heels in love with Detective Marco, the half-brother of her victim, the late and unlamented Darren. Felicity killed Darren with Dineo’s help because he was blackmailing them. And now look who is investigating Darren’s murder! Felicity must try to stay ahead of Marco before he discovers the truth: that his lover and her stepmom murdered his half-brother. Yikes!

In the last week of October, Felicity stays close to Marco as he grieves for Darren. She even helps him to plan the funeral! She must keep her pose with Marco even as she tells Dineo, “Marco thinks he is burying a saint. Part of me wishes I can just tell him exactly who he (Darren) was: this money grabbing little blackmailer who was trying to kill us.”

It’s a hard life to balance the responsibilities of the woman who loves Marco, and the one who killed his brother. And look out, Felicity, because there’s a witness! Marco is going to be having a friendly chat with a cop who saw something – and someone – the night of Darren’s disappearance.

And the DNA results are in!

Robbie was down in the dumps because he thought he had lost to fight to claim his birth right and to become a legitimate Price, but sis Elizabeth reaches out to him at the end of October and convinces him to take a DNA test to finally get some solid proof.

Elizabeth is quite keen on Robbie being part of the family, which she tells him in the last week of October. “Honestly I would love to have another brother,” she says. But mummy dearest Angelique Price does not share her feelings. And when November strolls along, the DNA results are in….

Angelique won’t get things all just on her own terms, though. Denise (Fiona Ramsay) – Robbie’s mum Janet’s (Kate Normington) sister and therefore Robbie’s aunt – will be in town a while and she is also going to get on the wrong side of Angelique when she drops a major truth bomb.