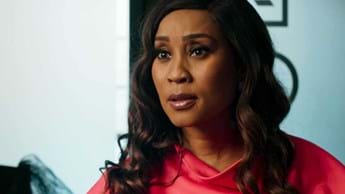 Widowed Legacy CEO Dineo Price (Kgomotso Christopher) has been playing a dangerous game since the end of April by hooking up with Legacy Investments board member and head of communications Msizi Zulu (Siyabonga Thwala) in M-Net’s (DStv channel 101) high-stakes telenovela Legacy. And not because they’re potentially in breach of their morality clause, which states that they can be removed from their positions should their actions bring Legacy Investments into disrepute. No no no – the real threat to Dineo is that little gold ring on Msizi’s finger. Because while we’ve not seen or heard of The Mrs. Zulu, things are about to change right at the end of the episode on Thursday, 13 May.

Snakes in the grass

It’s no secret that Felicity Price (Mary-anne Barlow), Dineo’s stepdaughter, and Felicity’s hubby, James (Robert Hobbs), have wanted Dineo gone. Felicity is still reeling from both the fact that her dad, Sebastian (Deon Lotz) – who she murdered – overlooked her as his successor in favour of Dineo, and that he wrote her out of his will at the end of April. So watching the pair conniving and getting photographic evidence of Dineo and Msizi’s love affair isn’t surprising. Nor is it surprising to see them convening a special board meeting and exposing the CEO and executive board member in the hopes that Felicity will win and become CEO, with Dineo ousted. But that’s not their only plan of attack – the episode ends with the arrival of Mrs. Zulu – and Thandi (Lerato ZAH) is not in the mood for games after James tells her what her hubby has been up!

Mrs. on a mission

Thandi is not in the mood for games on Monday, 17 May. She makes that painfully clear to Dineo, who strangely doesn’t know who she is when Dineo arrives at her Legacy office. “Sorry, I don’t have meetings scheduled and I don’t do walk-ins,” says Dineo, who is visibly stunned when Thandi calmly says, “You know who I am. You’re sleeping with my husband.” Dineo doesn’t so much look like a deer caught in the headlights – she IS the deer caught in the headlights. She’s stuck where she’s standing, nervously extending her arm to shake Thandi’s hand.

It’s the strangest encounter, because while Dineo is clearly shaken, caught off-guard and backed into a corner by this confrontation, Thandi on the other hand seems to be an old pro at this very situation. Even when she bumps into her stepson, Sims (Lunga Shabalala), who is confused by her being there and tells her that he’s on his way to see his dad (who clearly doesn’t know about Thandi being there, either), Thandi doesn’t bat an eyelid and continues walking calmly to Dineo’s office for a little chat.

Not her first rodeo

Let’s make this clear: Thandi is power. From the way she walks and dresses, to the way she focuses on you, looks you in the eye and speaks in the calmest tone, she exudes power and authority, and she’s got Dineo quaking in her designer heels. You’ll have to wait for the episode on Monday, 17 May to find out exactly what Thandi says to Dineo about Dineo’s affair with married Msizi, but it’s going to be juicy – and given what we’ve seen from Thandi, not all that surprising.

But wait until Msizi finds out that his Mrs. is upstairs at Legacy talking to his mistress… the panic and fear is scrawled across his face and says one thing: Thandi is a terror!