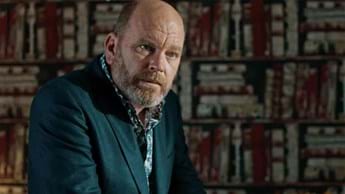 There are creeps on TV, and then there’s James in Legacy on M-Net (DStv channel 101). He’s vile, reprehensible, creepy and downright rotten to his core. “Nothing is below him,” says Robert Hobbs, who plays the loathed character.

“He had his son, Charlie (AJ Cullinan), kidnapped. He has lied to his wife, Felicity (Mary-anne Barlow). He has exposed Msizi (Siyabonga Thwala) and Dineo’s (Kgomotso Christopher) secret hook-ups… He isn’t a nice bloke. James would sell his mom if that meant getting what he wants,” Robert says.

And he’s going to go the extra mile on Thursday, 29 July by conning his wife, Felicity...

Robert’s character is no fool and everything that James does is for a reason. “He lost so much with the family in the past when he and Felicity were first married years ago (offscreen). When he came back to South Africa earlier this year, he lied to the family and had everyone wrapped around his finger. He has a full gameplan worked out. He’s helped Felicity take back control of Legacy Investments following the NPA tender investigation scandal during July, and he’s building a wall around Felicity, isolating her from her family.”

“James is well educated, he understands how business works, so he can justifiably throw his weight around in the boardroom,” says Robert. He goes on to remind fans that “James and Felicity have a connection and she trusts him. So if James makes a suggestion, Felicity will follow. James revels in anarchy and wants everything that he feels he is due,” Robert says.

There’s a saying that “it takes one to know one”, so it’s not surprising that James is constantly suspicious of Felicity. He knows his wife. He knows what she’s capable of and he knows when she is hiding something. And as fans know, Felicity has a lot to hide from the Price family: She and her then-lover, Stefan (Sean-Marco Voster), killed her father, Sebastian Price (Deon Lotz), and buried him under his favourite rose bush at the Price mansion.

While so much has happened since episode 1 in September 2020, when Felicity went from loving daughter to murderous child, James can’t help but go digging in his wife’s business. After all, according to their marriage agreement, what is Felicity’s is also James’s. And since there’s billions on the line, as well as control over family business Legacy Investments, James knows that he has to go the extra mile to get any info out of Felicity.

James also knows that once Felicity’s lips are sealed, there’s very little that will have her spilling her secrets. In fact, it would probably take a truth serum and drugging Felicity to get her to reveal things she’s keeping close to her chest… and that can be arranged...

If only James knew that he won’t just be digging for info in the month ahead.