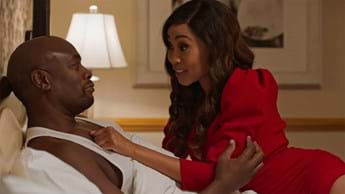 When it comes to her affair with chairman of the Legacy Investments board Msizi Zulu (Siyabonga Thwala), widowed CEO Dineo Price (Kgomotso Christopher) has one rule: “It’s just physical. There’s no relationship here. She looks at him as an end to a means,” explains Kgomotso, whose character was recently given the go-ahead by Msizi’s wife, Thandi (Lerato ZAH) to continue her affair with married Msizi. Their scorching affair has had us fanning ourselves in M-Net’s (DStv channel 101) 2021 Best Telenovela SAFTA-winning show, Legacy. And it’s only getting hotter!

“In the past, when Dineo was still a wife to Legacy boss Sebastian Price (Deon Lotz), she would look at Msizi and think, “Eeeuw, you and I will never be like that. You are not my type,” reveals Kgomotso. But ever since Msizi offered his support to Dineo during her court case against her stepdaughters and they started their affair at the end of April this year, there’s been a connection. It’s a bond that’s going to be even more intense by the end of the episode on Thursday, 27 May.

While Thandi knows about the hook-ups between her hubby and his boss, as does the board – thanks to Felicity (Mary-anne Barlow) and James’s (Robert Hobbs) attempted coup – the rest of the world can’t know. That’s why they’re secretly booking into hotels for their romps. And it’s something Msizi isn’t really happy about, saying to Dineo, “Yet we’re still hiding in hotels.” You can see that she’s not exactly pleased at him pushing, as she replies, “Are you tired of our hotel rendezvous? Where do you want us to go? The Price mansion? The Zulu household?” And Dineo is really not happy when Msizi says, “That’s not far from the truth,” hinting that he wants to show off their relationship, even if it’s just to their families. Dineo curtly brushes his suggestion off with an “I have to go” and that’s exactly what she does, putting her earring on and leaving.

Dineo might’ve wanted to stay in the hotel, because when she gets home her mother, Kedibone (Clementine Mosimane), is waiting to lecture her, warning Dineo about the problems of dating a married man. Instantly behaving like a petulant teenager who knows better, Dineo snaps, “There are so many people giving me guidance in this house, I don’t know what to do with it. Yes, I’m seeing a married man, but his wife knows.” She tries to explain that Thandi doesn’t care if Msizi has his cake and eats it, but he’s not allowed to bring a second helping home.

“They (Thandi and Msizi) have an arrangement, an agreement,” says Dineo. That’s the wrong thing to say because the wiser older lady lashes out, “Agreement? What? Will you be the second wife?” The rage on Dineo’s mom’s face is evident, but Dineo tries to insist that it’s just physical. “It’s not that serious. I told you. I am seeing Msizi and it doesn’t hurt anyone. I am being very careful.”

It’s not just Dineo’s mom who’s worrying – Thandi makes it clear to Msizi who his main concern should be: Her. Caressing his face, she tells him coldly, “Remember that you have a family that you must still take care of at home. Don’t get too wrapped up in Dineo.” While Msizi has had affairs before, the intelligent, strong-willed powerhouse that is Dineo seems to be affecting Thandi differently. It looks like Thandi is fearful that he’s going to fall out of love with her and in love with his latest bed mate. Is she right?

Msizi walks into Dineo’s office coyly and tells her that he wants to have a strat meeting – and he’s not talking about Legacy business. Seething after her morning chat with her mom, Dineo bluntly tells her lover, “Msizi, we’re at work, where things between us stay professional. That is my rule and if you break it, I would have to choose between us being colleagues and lovers… and I’ve already got enough colleagues.”

Backed into a corner

Only a select few know about Dineo and Msizi… and one of them is Angelique (Michelle Botes, winner of the 2021 Best Supporting Actress in a Telenovela SAFTA for her role as Angelique), who has hated Dineo for stealing Sebastian from her all those years ago. You’d think that Dineo would be wary of being at a Legacy event with Msizi, Thandi and Angelique all in one room at the same time, but what’s the worst that could happen? It’s not like Angelique is going to expose them to the Legacy investors, right?

Ding dong, you’re wrong! Because that’s exactly what she does, sending the trio storming out of the event covering their blushing embarrassment. And it’s just the excuse that Msizi has been waiting for to propose a new arrangement to Dineo…