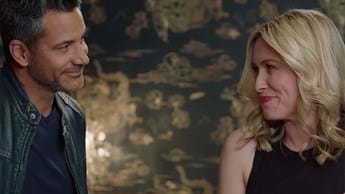 With S2 of high-stakes SAFTA-winning telenovela Legacy taking to the screens this October on M-Net (DStv channel 101), the drama and scandal surrounding the billionaire Price business family is getting cranked up a notch. Throw in two unexpected romance arcs and Legacy is going to be raising more than just temperatures with its onscreen storylines. And there’s more to get excited about…

You can get early access to brand new episodes of Legacy S2 on Catch Up via the DStv app or on your internet-connected DStv Explora. You’ll be able to see all this season’s action a day ahead of the channel premiere as you continue to watch Legacy via early access.

Felicity (Mary-anne Barlow) hasn’t had much luck with love. Her hubby James (Robert Hobbs) blackmailed her, manipulated her and emotionally abused her – until she had him killed last month. Her on-off lover Stefan (Sean-Marco Voster) wants nothing to do with her after she used and abused him and dragged him into murdering her dad, Sebastian Price (Deon Lotz).

So perhaps she’s looking for love in the wrong place when she meets handsome Marco Andino (Survivor host Nico Panagio). But Marco isn’t who he seems – from the outside, he’s a handsome broody stranger. On the inside, he’s connected to Darren, the blackmailer that Felicity and her stepmom, Dineo (Kgomotso Christopher) killed at the start of S2 and he wants revenge.

“Marco is quite the juxtaposition to Felicity in that he optimises a simpler and more direct approach to life. When he is working as a detective, he is very focused and serious, very broody. However, when he is with her, you see the side of him that has been kept hidden for what seems like many years,” says Nico. I think these characters coming together shows a side of Felicity to the audience that has not yet been explored, and I'm hoping the viewers enjoy the way that unfolds. We want viewers to fall in love with their love and to share their despair when they struggle through the hardships that threaten this new discovery. So doing, we all go on an emotional journey with these characters, and our job would be well done. That is what I hope for.”

The trouble comes in when Marco tells Felicity one story and Dineo another – and neither woman realises who the stranger they’re dealing with really is. As for what Marco’s digging for at Legacy Investments, Dineo will be keeping an eagle eye on his every movement.

Youngest Price daughter Lexi (Jay Anstey) is the carefree sister who has very little interest in the family business. She’s in touch with the youth, knows about being “woke”, and uses social media like a Rockstar. So, it’s a little odd for her when Sims (Lunga Shabalala) asks her for a business meeting for his new venture with Stefan.

It’s no secret that Lexi has had her eye on the hunky hotshot businessman since his arrival at Legacy earlier in the year – she’s practically drooling whenever she’s in the same room as Sims. She’s never acted on her impulses… but that’s going to change when he gets her heartrate soaring with his “business talk”.

Sims isn’t just a pretty face - he actually knows what he’s talking about and that’s why he’s pitching the venture to Lexi in the hopes of scoring funding. She’s got cash, they’ve got an idea – it’s a match made in heaven...right?