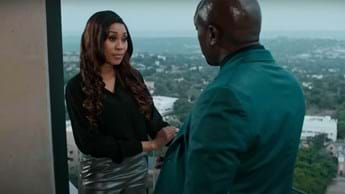 Backstabbing is the name of the game on M-Net’s (DStv channel 101) high-stakes telenovela Legacy. On Thursday, 29 April, lines are blurred and dangerous liaisons are sounding a seductive call– and not just in the Price family Mansion.

Grieving widow Dineo Price (Kgomotso Christopher) is battling her step-daughters in court over Sebastian’s will, and it’s taking its toll on her both physically and emotionally. She doesn’t even want her son, SJ (Anton Jeftha), to see her on the day she’ll be testifying. But she’ll have some friendly support in the courtroom that she wasn’t expecting…

When Dineo’s businessman husband, Sebastian Price (Deon Lotz), died in episode 1, her world was thrown into chaos. Not only had she lost the man she loved and the father of her child, Sebastian left a void at his company, Legacy Investments, which resulted in all-out corporate war for the CEO position. The sharks started circling almost immediately while Dineo was treading water.

Then in mid-April when Sebastian’s will was finally read, it gave those sharks something to want to tear apart. “To my dear wife Dineo, I leave my estate, all shares in Legacy, all assets as well as control of the family trust,” might be generous words from her loving late husband, but by cutting out the rest of his bloodline, he spilled blood in the water.

Dineo didn’t just have to be wary of her ruthless stepdaughter, Felicity (Mary-anne Barlow). Legacy’s head of communications and executive director Msizi Zulu (Siyabonga Thwala) turned out to pose an even greater threat. He’s done everything from blackmail Felicity for that not-so-little “I murdered my daddy” secret, to using his power to hire his son, Sims (Lunga Shabalala), and make him head of vital Legacy projects when he far less than qualified. In short, Msizi is a corporate monster who never lets an opportunity pass him by.

Dineo and Msizi haven’t always seen eye-to-eye, and Msizi has never been coy about wanting the CEO position that Dineo has inherited. In fact, he’s blatantly said “I want that job” numerous times. So Dineo can be excused for looking surprised when Msizi arrives at court on the day Dineo will be giving testimony (Thursday, 29 April) about Sebastian’s will.

“What are you doing here, Msizi? You’ve got to be careful associating with me, people say that I’m very toxic,” Dineo asks, to which Msizi replies with unusual compassion “I thought it’d be great for you to see a friendly face in the gallery for once.” Convincing, right? Right! But later in the episode, watch when the camera zooms in on Dineo and SJ as the judge is speaking – Msizi’s body language screams anything but supportive…

Business is business, but…

It’s not uncommon for Msizi and Dineo to be seen together at the Legacy offices. She’s CEO and he’s a high-ranking board member – they have legitimate business to take care of. Sure, they’ve had their differences, but they’ve always been on the same wavelength and they have a cordial work relationship even though they’re in charge of billions of Rands worth of deals.

So them being on the courtroom’s balcony isn’t surprising because it’s a quiet place where they can speak candidly and not be overheard. But there’s a difference on Thursday, 29 April – Msizi is behaving a little more subtly than usual, a little more empathetically. He tells Dineo that he was wrong for judging her and thinking that she was a gold-digger. “After hearing that letter in court, what you and Sebastian had was once in a lifetime. I understand why you’re still so caught up in him,” he says, as if he’s opened Dineo’s heart and seen her longing for people to recognise both her competence and the love she lost when Sebastian died.

Msizi seems to be showing his vulnerable side when he takes Dineo’s hand and kisses it gently. Is this a gesture of support and affection or a poisoned apple?

PS: That's not the only kiss we’re going to see in the courtroom.

Things are heating up! Watch it all unfold this week on Legacy.