Bridgette and Donovan get engaged – but does Donovan have a past as Lady Killer in Suidooster? Watch DStv to find out… 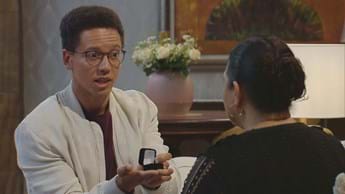 Astute Ruiterbosch businesswoman Bridgette Jacobs (Denise Newman) never thought she would find true love in the Afrikaans soapie Suidooster. But fate had other plans after Donovan (Marvin-Lee Beukes) started as an estate agent at her business, Jacobs Property Development (JPD), this September.

Initially she wasn’t impressed by the youngster, but as time went by her heart softened and they’ve fallen madly in love. So at the end of this month, Donovan is going to put a ring on it.

Zoe (Lauren Joseph), Bridgette’s niece, has been against the relationship from the get-go, though. Her gut tells her that Donovan is hiding something, and when she goes digging in Donovan’s past, she could just find what she’s looking for.

PS: Want to know what Zoe finds already? Hate the wait? Get early access to brand-new episodes of Suidooster Season 7 on Catch Up via the DStv app or on your internet-connected DStv Explora. You’ll be able to see all this season’s action a day ahead of the channel premiere!

“It’s a lovely moment filled with compassion,” says Denise of the scene in which Donovan asks Bridgette to marry him at the end of November.

“Donovan asks her at her house after they’ve had an evening out. He tells her how much he loves her. The moment he goes down on his knee catches her off-guard and she doesn’t say ‘yes’ immediately. Bridgette first wants to work through what happened, but the next day she tells him that she will become his wife.”

Bridgette invites the whole family to share in their happy news on Tuesday, 30 November. “The family has started to accept that Donovan and Bridgette are serious about each other, but no one saw that they will get married,” says Denise. “It’s a big shock to them.” Mrs. J (Theresa Sedras), Bridgette’s mom, is glad for her daughter because she can see that Bridgette has found true love. But Zoe is furious and doesn’t want to have any part of it.

Zoe is unhappy about the engagement – to say the least – and she tries to convince her aunt to reconsider. “Bridgette tells Zoe that she’s wasting her breath,” reveals Lauren. “And that it doesn’t matter what Zoe says to bring about a divide between Bridgette and Donovan, Donovan is here to stay.”

Bridgette is excited to have an engagement party and she convinces Donovan – who isn’t too thrilled with the idea – to have a small celebration. “Bridgette says that she wants an intimate affair with her loved ones to celebrate their happiness. And Donovan agrees because he’ll do anything to make her happy. The party is at Bridgett’s house and everything is perfect… until Zoe spoils it with a wild accusation,” hints Denise.

Zoe claims that Donovan killed his previous girlfriend, Louzanne. Zoe even has newspaper clippings about Louzanne’s death and the questions that arose afterwards, since it looked like it might not have been a simple accident. Donovan was the sole beneficiary of her life policy…

“Bridgette is dumbfounded because she didn’t think that she and Donovan had any secrets from each other,” says Denise. “And because she doesn’t know what to believe, she asks her friend, ex-investigator Chris (Marcel van der Merwe), to dig a bit deeper.

Meanwhile, Donovan insists that he is innocent. “He says he loved Louzanne and her drowning was an accident. He says that he knows it looks suspicious since he was the only person there when she drowned. And he also admits to getting the life policy money, but says he gave it to her family,” explains Denise.

Chris comes back to Bridgette emptyhanded, though. “Louzanne’s dad doesn’t have a good word to say about Donovan, but nothing indicates foul play. And Donovan’s twin brother, Greg (also played by Marvin-Lee Beukes), says that Donovan may be ambitious, but he is definitely not a murderer.”

After that, Brigette makes it clear to Zoe that Zoe must accept the engagement. And when Bridgette then finds out that Zoe even offered Donovan money to pack his bags and leave, she immediately orders Zoe and her husband, Tim (Marco Spaumer), to move out of her house.

“That increases Zoe’s anger towards Donovan. Zoe feels like she has lost, and she detests losing. She is still convinced that Donovan is bad news,” Lauren adds. “She just can’t accept that her instinct about Donovan is wrong. And she will keep on digging until she finds what she wants…”