Whirlwinds of change in Suidooster this November 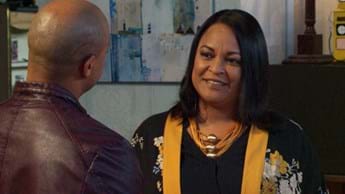 It's going to be a busy month in kykNET’s (DStv channel 144) Afrikaans soapie as a chaotic wind blows about in the community of Ruiterbosch.

AB (Cedwyn Joel) just couldn’t shake the feeling that something was fishy surrounding how he suddenly got a kidney donor, and with some further investigation with the help of his friend and former detective Chris (Marcel van Heerden), AB finds out that his half-brother Nazeem (Irvine van der Merwe) bought a kidney for him illegally!

Ty (Maurice Paige) and Lee-Ann (Portia Joel) called it quits when things became too hard to handle after they became an instant family in July thanks to Ty’s son Carlo (Jadon Booysen). But they recently got back together and this November, they’re hoping to make it down the aisle.

And there is trouble in paradise when Elana (Esther von Waltsleben) wants to start a family, but her wife Susan (Natasha van der Merwe) has reservations and when things get too real, Susan starts an affair.

It’s all happening this month in Suidooster...

Dark times lie ahead for the Samsodien family as AB declares war against Nazeem. “He can’t believe what Nazeem did,” says Cedwyn. “It’s not for Nazeem to decide who lives and who doesn't so that AB could get a kidney.” AB is disgusted by Nazeem and is on his way to hand him over to the police, but before he can go so far, his beloved wife Mymoena (Jill Levenberg) reveals that she was part of Nazeem’s plan and knew all about the illegal kidney.

This news breaks AB’s heart, he did not see that coming, and now he finds himself in an impossible situation. . . Will AB also hand over his wife to the authorities or would it just be better to ask for a divorce? AB doesn’t have the answers, but living with this secret is eating him up inside.

On Tuesday, 2 November Ty and Lee-Ann’s wedding bell rings out and it’s a joyous celebration. Viewers might just need to grab a tissue or two as the happy couple say their vows to each other.

But another marriage is in troubled waters when Elana wants to start a family and she goes for fertility tests without telling her wife, Susan. “Susan is shocked when she finds out about the test,” says Natasha. “She feels that Elana should have discussed it with her and not just done things in secret.”

Starting a family soon becomes a bone of contention between Susan and Elana. “Elana feels Susan deceived her and that she doesn’t want to be a mom and have kids,” says Esther. The tension is high and then before Susan can stop herself, she ends up in the arms of someone else. . .

There is no denying that the romantic relationship between the much older Bridgette (Denise Newman) and her employee Donovan (Marvin-Lee Beukes) has her family upset, especially Bridgette’s niece Zoe (Lauren Joseph), who is convinced that Donovan is a gold digger.

She makes life unbearable for the happy couple and then, to make things worse, Donovan’s identical twin Greg (also played by Marvin-Lee) rocks up in Ruiterbosch looking for a handout.

Greg is the opposite of Donovan, he can’t hold a job and is a troublemaker, and of course he is going to try and pull the wool over Bridgette’s eyes, which is going to make Donovan furious.