Nazeem blackmails Tim on Suidooster S7 | Watch it on DStv

Property is a cut-throat business 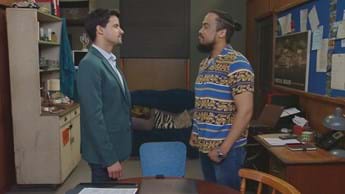 Architect Tim du Plooy (Marco Spaumer) on the kykNET (DStv Channel 144) soap Suidooster is a man of ambition, and right now he’s clawing his way to the top in the property business. So when he got the opportunity for a sweet deal on the coast, he grabbed it with both hands.

But his dream to develop his new property has hit a snag because he didn’t do his homework properly, and now he sits with a massive mess. Tim is about to sink even deeper into the financial mire when he makes the worst decision of his career… and it’s 1 that will cost an innocent man his life.

“There is a cottage that actually divides the property. It ruins his plan to develop it because he needs the whole area,” explains Marco. But where there’s a will, there’s a way – or rather, Tim will find a way. He approaches Nazeem the schemer (Irvine van der Merwe) to intimidate the owner of the cottage, Mr. Cilliers (not on screen), to sell his part of the property.

“Tim and Nazeem don’t see eye to eye, but they are birds of a feather,” says Marco. “They have pulled together in the past to do people in. Tim needs someone to do his dirty work, and he knows Nazeem will do it for a price as Nazeem has a cash flow problem. Nazeem will also make sure that no fingers can be pointed at Tim for being involved.”

But things don’t go as planned when Nazeem pays Mr. Cilliers a visit to scare him into selling. “A fight ensues and in the heat of the moment, Nazeem pulls out a knife and stabs Mr. Cilliers ‘to defend himself’,” Marco reveals.

All clues lead to Tim…

Mr. Cilliers is hospitalised and when he wakes up, he points the finger directly at Jacobs Property Development (JPD) – the development company where Tim works – as the guilty party who organised the stabbing, seeing that JPD approached him to sell shortly before the incident. “Tim is anxious about what Mr. Cilliers is saying and he has to put out fires when his wife colleague Zoe (Lauren Joseph) starts asking questions about his involvement,” adds Marco.

The only silver lining in the messy business (for Tim, that is) is that when Mr. Cilliers succumbs to his injuries, Zoe lets the matter go.

As Tim scrambles to get the money he owes Nazeem, the costs of both their greed keeps rising. 1 of JPD’s employees will have to lose her job, too. “Sandri works in JPD’s financial division, and Tim frames her for leaking company intel to their rival company PanVista. She is fired on the spot, but, of course, Tim has a hidden agenda as he volunteers to work in the department so that he can cook the books and get money to pay Nazeem,” explains Marco.

Meanwhile, Nazeem is putting more and more pressure on Tim to pay up – and he makes it clear that this isn’t his last financial request. “Nazeem has the upper hand,” says Irvine. “He will continue to ask Tim for money, and for now it doesn’t look like there is any way for Tim to get around it…”

Coming up soon, Justin (Eden Classens) finds himself in a pickle when an ex-flame, Samantha (Hannah Borthwick, Leandré in the action series Die Boland Moorde), shows up and threatens his relationship with Susan (Natasha van der Merwe).

Justin accidentally texts Samantha and when she gets a foot in the door to see him, devious Samantha instantly decides that she will do what it takes to win him back. She even befriends Susan under a false name. But things get complicated when Samantha – or Magda, as she introduces herself to Susan – begins to like Susan and forms a real friendship with her.

Don’t think that Samantha is willing to let Justin and Susan be happy, though, she’s working with a plan…