Meet the child stars of kykNET 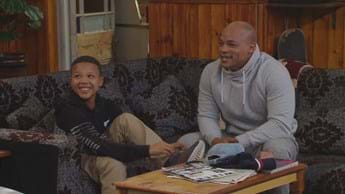 If you want to meet some of tomorrow’s stars today, tune in to Afrikaans channel kykNET (DStv channel 144) this September and see captivating young performers in local soaps like Binnelanders, Suidooster and Getroud Met Rugby.

Some of them will pull at our heart strings, while others are just too adorable and make you laugh out loud with the innocent and hilarious things they say.

We chatted with some of the kids to discuss about their experience behind and in front of the cameras.

Young actress Roxanne Bornman (11) who plays Vicky in Binnelanders (weekdays at 19:30) has found a special place in viewers’ hearts with her brown eyes and cute little nose. Since her aunt and guardian Dr Elana (Ilne Nienaber) passed away in July, things have been hard for her and her older brother, Ruan (Caiden Bouwer, 14), even though Elana’s fiancé, Steve (Clint Brink), tries his best to be the perfect father figure to them.

“Vicky really misses her aunt Elana,” says Roxanne. Wanting to feel close to her aunt and honour Elana, she cut her hair in a pixie style (on Friday, 10 September) just like Elana used to wear it. “Now when Vicky looks in the mirror, she will see her aunt Elana,” adds Vicky.

In the real world, Roxanne suggested she cut her hair because she and her twin sister, Danielle, recently started swimming lessons three times a week and they love it. “The shorter hair is easier to maintain after we swim,” says clever Roxanne.

The newest addition to the Suidooster (weekdays at 18:30) family is young actor Jaydon Booysen (13). He plays Carlo, Ty’s (Maurice Paige) son who Ty only found out about in July.

It’s been a battle for Carlo and Ty to adapt to their new lives since Carlo moved in with his dad, and there are plenty of daily challenges they must overcome. “I am proud of myself on becoming a permanent cast member, because this helps me to build my future,” says Jaydon.

Ty and his fiancée Lee-Ann’s (Portia Joel) relationship came to an end at the start of September due to the extra pressure, and it doesn’t look like they will reconcile. “Carlo is sad about it. Even though he thought aunty Lee-Ann didn’t like him, now with her gone, he realises he actually liked her and she did care about him.” And things are going to get messier still later in September when Carlo will start a new hobby that dad Ty isn’t too fond of.

In 2019, viewers met charismatic young actor Dirk Jacobs (13), who plays Johan Vermeulen, son of rugby player Blitz Vermeulen (Werner Coetzer) in Getroud Met Rugby (GMR, weekdays at 18:00). Like Ty in Suidooster, Blitz didn’t know he had a son, but as storylines developed, Blitz reconciled with Johan’s mom, Lienkie (Mandi du Plooy-Baard), and they got married in 2020.

Dirk says he feels lucky to have a job at GMR. “I love my character and I love to experience how he develops and grows with each storyline.” In August, Johan got the shock of his life when his parents were held hostage by a deranged security guard who worked at the building they live in. The guard had a sick obsession with Lienkie. “It was scary for Johan, and he struggled to feel safe after that. But with the help of his parents, he will not have permanent emotional scars,” says Johan.