Coming up on Suidooster this August | DStv 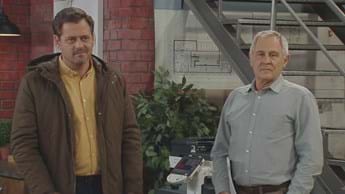 The community of Ruiterbosch in kykNET’s (DStv channel 144) Afrikaans soapie Suidooster will be shaken by rough winds in August.

Kaashifa (Jawaahier Petersen), and Bianca (Simone Biscombe) race to acquire shares in Oos-Wes, the restaurant they work at, but only one will get the funds in time. And when that happens, all hell will break loose.

Bianca is flabbergasted when Kaashifa buys shares in Oos-Wes right out from under her nose. This means that Kaashifa instantly becomes co-owner of the restaurant, along with businesswomen Bridgette (Denise Newman).

Bianca feels betrayed, and to make matters worse, Kaashifa doesn’t wait for everyone to get used to the idea that she’s no longer “just the chef”. Off the bat, she starts giving orders and she changes the menu completely.

Bianca, who has worked her way up in Oos-Wes from a waitress to manager, suspects that the changes won’t be good for business, and she defies Kaashifa by not changing the menu. Kaashifa is furious when she realises this and gives Bianca her first verbal warning. More and more arguments will arise during the month until one of them does something drastic.

A new face in Ruiterbosch

New resident Werner doesn’t waste any time worming himself into Jacobs Property Development (JPD) as their new head of security. His sole intention is to get closer to former detective Chris, who’s the current head of construction at the company.

Exactly what beef Werner has with Chris is not known yet, but it has something to do with Chris’s days in the police force, and Werner is keen to see his revenge plan succeed. He wants to destroy Chris and ruin his reputation – and he’ll stop at nothing to achieve this.

Ruiterbosch’s trusty mechanic Ty’s world was turned upside down in July when it was revealed that he has a 13-year-old son named Carlo (Jadon Booysen). Ty never knew he existed until Carlo’s mom died offscreen, and since then Ty has been in two minds as to whether he wants the boy in his life or not.

Carlo has since moved into Ty’s house, but the teenager has one problem – he doesn’t like Ty’s fiancée, Lee-Ann. Things won’t improve in August, no matter how hard Lee-Ann tries to forge some kind of relationship with Carlo. Lee-Ann will find herself at a crossroads and that will determine if her love for Ty will overcome all their problems.