We’re getting married and you’re not invited! 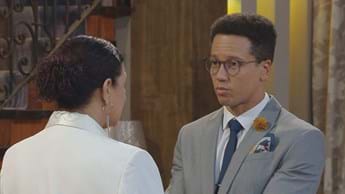 They’re keen to tie the knot and decide that the quickest way to do it would be in court. Once they sign on the line, there’s nothing that Zoe (Lauren Joseph), Bridgette’s niece, can do, despite her outspoken objections against their relationship. “Mrs J (Theresa Sedras), Bridgette’s mom, her sister, Lee-Ann (Portia Joel), Lee-Ann’s husband, Ty (Maurice Paige), however, are all fully behind Donovan and Bridgette and go with them to court to witness the joyous occasion,” says Denise.

Zoe and her husband, Tim (Marco Spaumer), are shocked when they hear that the wedding took place and they weren’t even invited, which sours the relationship between Bridgette and Zoe even more. But soon that isn’t Bridgette’s only worry. Shortly after the wedding, Donovan’s twin brother, Greg (also played by Marvin-Lee Beukes), moves in with the lovebirds, and he comes with a whole new set of problems.

PS: Want to know what Greg is up to? Hate the wait? Get early access to brand-new episodes of Suidooster Season 7 on Catch Up via the DStv app or on your internet-connected DStv Explora. You’ll be able to see all this season’s action a day ahead of the channel premiere!

The biggest mistake of her life?

“Zoe is upset and tells her aunt she made the biggest mistake of her life,” says Lauren. “She is also still annoyed that they weren’t even invited to the wedding.”

Bridgette doesn’t really care for Zoe’s attitude but she invites her family to her house to celebrate their union. Donovan is beaming with happiness at the get-together. “To be Bridgette’s husband means the world to him. Bridgette is the love of his life, and he can’t believe his luck,” says Marvin-Lee. But Donovan’s smile gets wiped off rather quickly when Zoe waves an antenuptial agreement in front of his nose, insisting that he signs…

Bridgette is furious about Zoe’s ploy with the contract. “Zoe is again meddling in Bridgette’s personal life,” says Denise. “Bridgette then tells Donovan not to even think about it, as it’s just another way that Zoe is trying to come between them. Bridgette says Zoe is turning their marriage into a business transaction,” says Denise, who knows it’s anything but true.

But it does bug Donovan, and since he doesn’t know what to do, he turns to Tim for advice. “Donovan asks Tim why Zoe is so militant and feels threatened by him. And Tim explains that Donovan must remember that the Jacobs family have had a lot of people who wanted to abuse them,” says Marvin-Lee. “Tim also says that Donovan must just persevere and be himself, because Zoe will eventually see his true colours.” And with that in mind, Donovan signs the antenuptial agreement.

Zoe is taken aback by Donovan giving in and signing the contract, and slowly but surely her attitude towards him starts to change. “Zoe realises that Bridgette is truly in love with Donovan and that she must make peace with it. She took things too far,” says Lauren. And to show that she is sorry, Zoe and Tim surprise the newlyweds with a honeymoon at a luxurious hotel in Knysna.

Meanwhile, Greg pops up in Ruiterbosch again, looking for his brother. Something is clearly wrong with him, and his behaviour gets weirder and weirder. When Donovan and Bridgette return from their honeymoon, Greg calls Donovan. “Greg tells his brother that he can’t get hold of his sponsor and he is standing in front of a tik house. Greg doesn’t know what to do. He wants to use tik and he’s trying not to give in. It’s a desperate cry for help.”

Donovan is ashamed about his brother’s drug addiction and wants to hide it from his wife. And even though he wants to keep it a secret, he lets Greg move in with them to keep an eye on his brother. But is this a wise choice? Drug addiction is a serious monster that Donovan won’t be able to keep away from Bridgette. And it might give Zoe cause to rethink her new-found acceptance of Donovan and Bridgette’s marriage.