Coming up on Suidooster this October | Watch it on DStv 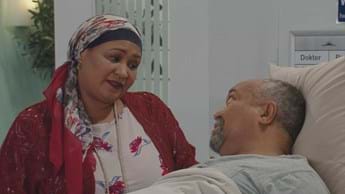 Viewers are in for rough winds this October on kykNET’s (DStv channel 144) Afrikaans soapie Suidooster thanks to a medical crisis and business as un-usual… But most of that wind is being generated by the tongues furiously wagging about Bridgette and Donovan’s love affair.

Ruiterbosch’s pillar of the community and lovable pharmacist AB’s (Cedwyn Joel) health has been declining fast ever since he was diagnosed with polycystic kidney disease in September. Aside from dialysis, the only way he’ll survive this is if he gets a kidney transplant, but with donors in short supply and a long queue on the waiting list, will he get it in time?

And see how best buds Justin (Eden Classens) and Wade (Dein John Smith), who are always strapped for cash, start a new business called Kuierkêrels, in which they rent out their services as companions for events. And Bridgette finds love again with her employee, Donovan (Marvin-Lee Beukes), which raises eyebrows in the community.

A life for a kidney

AB has made peace with his situation and that there is a strong possibility that he might die, so he tries to get the best out of life in the time that he has left this month. But his wife, Mymoena (Jill Levenberg), and half-brother, Nazeem (Irvine van der Merwe), aren’t willing to leave him in the hands of fate. Desperate to cling to AB, Nazeem buys an illegal kidney! Mymoena is against this plan when she finds out what Nazeem is up to, but as AB gets weaker, she urges Nazeem to go forth, drowning out the nagging voice of her own conscience.

AB is no fool, though. He becomes determined to know where his kidney comes from – and sooner than later – he will confront Nazeem about the organ’s origin, why it came so quickly, and from whom…

In need of a date?

Wade and Justin are always ready for a new plan to strengthen their bank balance. Their last money-making attempt – to host house parties – is still fresh in our minds. It didn’t take long before they realised that the open-door parties were a mistake: they were robbed, and the neighbours accused them of disturbing the peace. But now a new get-rich-quick scheme is making cash register noises in their heads.

Justin comes up with the idea for a business: He and Wade will accompany single women to parties – for a fee. Justin’s friend designs a website to advertise their services, and when Wade sees it, his initial reluctance disappears. However, their new business, which they christen Kuierkêrels, has its own problems, and it results in a black eye, along with some relationship problems for Wade, who has his eye on lawyer Dawn (Bronte Snell).

Love is in the air for businesswoman Bridgette and her much younger employee, Donovan, who joined Jacobs Property Development in September. At first, Bridgette wasn’t fond of Donovan at all, but he has impressed her with his work ethic and the more time they spend together, the more they couldn’t deny that Cupid struck their hearts. Donovan wants to tell the world of their love, but Bridgette wants to keep their relationship a secret for now.

Eventually the truth comes out which angers Zoe (Lauren Joseph), Bridgette’s niece, immensely. And to make things worse, they become the talk of the town when the rest of the community finds out! Now to see if their relationship will survive the Suidooster gossip.

Watch Suidooster from episode 1 on Showmax.