Love & Loss on Suidooster This September | Watch it on DStv

Love and loss on Suidooster this September 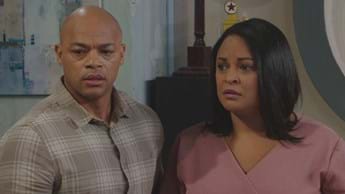 The pressure of becoming an instant family takes its toll on Ty (Maurice Paige) and Lee-Ann’s (Portia Joel) relationship, which could mean the end of their love.

And a new agent joins the ranks at Jacob Property Development (JPD) – and with his good looks and charms he quickly gets close to boss lady Bridgette (Denise Newman)!

Three is a crowd

Viewer were thrilled in July when Ty and Lee-Ann finally got engaged, but it wasn’t long before their world was turned upside down when Ty found out that he had a 13-year-old son named Carlo (Jaydon Booysen). Carlo moved in with Ty and Lee-Ann and, suddenly, they were an instant family.

This new dynamic is just too much for Lee-Ann, who’s struggling to cope with her work responsibilities and being a stepmom figure to the reluctant Carlo. And to make things worse, Ty is not taking charge of Carlo’s discipline. He turns a blind eye when Carlo doesn’t follow the rules and then Lee-Ann has to be the bad guy. Not only does it lead to fighting with Carlo, but it puts even more pressure on their fragile engagement.

Looks like Ty is going to have to learn to step up and actually be a father when a fed up Lee-Ann moves back to her mom Mrs J’s (Therese Sedras) house. She also suggests to Ty that they call the engagement off and just go back to dating to ease the pressure.

Ty is furious at Lee-Ann’s behaviour because in his head it’s all or nothing, and something tells us this might just be the end…

Love me but leave me

Susan loves her sister Linda, but is also very protective over her because Linda has Asperger’s syndrome and is on the autism spectrum. Linda yearns to be more independent despite her struggles and she longs for love and a relationship like any normal teenager.

So when Ruiterbosch resident Bennie shows an interest in her, she is thrilled. But she runs away when he tries to kiss her because she doesn’t know how to handle all the emotions she is suddenly confronted with.

The new guy on the block

Finally, a new character makes his debut in September, and he is going to cause some drama at JPD’s offices. Donovan (Marvin-Lee Beukes) is a charming and charismatic real estate agent who’s eager to climb the ladder at his new job. He quickly impresses his boss Bridgette with his hard work and sales, and not long after that their relationship takes a personal turn. Talk about scandalous!

Watch Suidooster from episode 1 on Showmax.

kykNET is available on DStv Premium and Compact Plus.To upgrade your existing package, click here. Or if you'd like to Get DStv, find a service that suits your needs here.