Bested by the Bookkeeper! 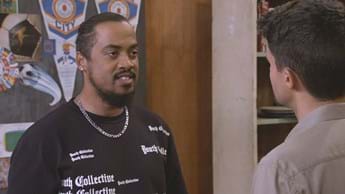 Tim (Marco Spaumer) is playing with fire on the kykNET (DStv Channel 144) soapie Suidooster! As architect and shareholder in Jacobs Property Development (JPD), he is embezzling money to pay off the evil Nazeem (Irvine van der Merwe), who’s blackmailing him after he hired Nazeem to threaten and intimidate someone so that Tim could get his hands on a property to develop it. But when the house’s owner died following a stabbing incident with Nazeem, the dying man pointed a finger at JPD.

Nazeem has a recording of his conversation with Tim to keep Tim coughing up the cash. But their deeds won’t lurk in the darkness for long. Mymoena (Jill Levenberg) – Nazeem’s sister-in-law – is about to expose them.

Mymoena started working at JPD earlier in March as their bookkeeper. “She was looking for a new challenge after being a housewife for years and only doing the books for Alwyn Apteek,” says Denise.

Initially she struggled to fit in with the company. “She seriously considered quitting because it felt like she couldn’t do it,” the actress admits. And to make matters worse, Tim did everything in his power to keep her from uncovering his fake company, Rex Storage, which he is using to get his hands on money from JPD coffers.

But where there is a will, there is a way, and with the support of her husband AB (Cedwyn Joel), Mymoena proposes a plan to her boss, Bridgette (Denise Newman), on how she can improve her performance. “Mymoena tells Bridgette it was easier at the pharmacy because she had personal relationships with everyone, and she could put names to the clients. So she asks Bridgette if she can’t to the same with JPD books – get to know the suppliers and visit them.”

Tim backed into a corner

Tim is furious when he hears that Mymoena wants to visit contractors and suppliers, and he warns Nazeem that he will get a call from Mymoena asking to visit Rex Storage – on 1 of their burner phones. “Nazeem masks his voice and is short with Mymoena as they can’t have Mymoena investigate this further,” says Marco.

“Tim takes his plan a step further and lies to Bridgette that the suppliers are complaining about Mymoena contacting them as if she’s checking up on them. So Bridgette has a stern talk with Mymoena and asks her to stop the calls and visits,” Marco adds.

Lee-Ann (Portia Joel), Bridgette’s sister, stands up for Mymoena, though. “Lee-Ann thinks Mymoena’s 1-on-1 relationships with the suppliers are actually to JPD’s benefit and she should carry on with it. So Mymoena gets the green light to continue her venture,” explains Denise.

Later Mymoena visits the Rex Storage premises, but there is nobody and nothing to see. Alarm bells go off and when Mymoena inspects the paperwork carefully, she uncovers Tim’s fraud which she exposes to Bridgette with a heavy heart. “Bridgette is shocked with Mymoena’s allegations, but when she sees the evidence it’s undeniable. Tim swore the company had been doing business with Rex Storage for years, but clearly that is not the case. And now all hell breaks loose,” says Denise.

Mymoena can’t even look Tim in the eye when he comes into the office and Bridgette calls him in. “She confronts Tim about what he has done. At first he is so desperate he denies everything,” says Marco. “But as the pressure mounts, he spills the beans and tells Bridgette and his wife, Zoe (Lauren Joseph), about Nazeem blackmailing him.”

Bridgette is fuming, but she conceals Tim’s deed and gets Mymoena to focus on something else. “Tim is family and a senior member of her team and a share-holder. It would be a mess and a scandal if his fraud were known to everyone,” explains Denise.

But now Bridgette has to find a way to get back her half-brother, Nazeem… And the gloves will be off!

They’ve been dating what feels like forever, and now Siya (Gantane Kusch) is ready to ask his girlfriend, Danni (Vashti Prins), to marry him. But with Danni’s dad, Simon (Elton Landrew), in Ruiterbosch acting suspicious, it’s not all hearts and flowers for the couple.

Danni is excited when her dad arrives from Paarl. “She doesn’t spend nearly enough time with him,” Vasthi adds. But he is acting weird and even puts the house where Danni grew up in for sale without telling her. While all this is happening, a conversation with Kate (Annelisa Weiland) and his other friends makes Siya realise that he is ready to pop the question. Just like that he proposes!

Suspiciously, Simon encourages his daughter and Siya to get married as soon as possible, and he accepts the first offer on his house. What’s the hurry? “Danni is angry because she can’t understand what is chasing her dad. She asks him what is wrong, but he talks it away,” Vashti adds.

Eventually it’s Siya who gets Simon to admit he has been diagnosed with motor neuron disease – and he doesn’t want Danni to know. But Siya can’t keep this secret from his fiancée and when he tells her, she realises that her father’s hourglass is indeed running empty. And that will definitely influence their wedding timeline…