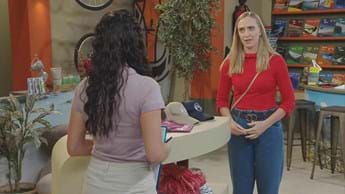 Things are looking bleak for Justin (Eden Classens) on the kykNET (DStv Channel 144) soap Suidooster. His ex-girlfriend Samantha’s (Hannah Borthwick) obsession with him is growing daily. In line with her plan to drive a wedge between him and his current girlfriend, Susan (Natasha van der Merwe), Samantha sows seeds of doubt about who Justin really is. It creates huge frustration for Justin and that leads to more drama. And when Susan’s work takes her out of Ruiterbosch for a bit, Samantha is quick to leap at the opportunity.

Hate the wait? Want to see what Samantha does right now, or else? You can already get early access to the next episode of Suidooster Season 7 on Catch Up via the DStv app or on your internet-connected DStv Explora. And you’ll be able to see all this season’s action a day ahead of the rest of the country as you continue to watch Suidooster via early access.

Ever since Samantha appeared on the scene at the beginning of February, Justin has been making it crystal clear to her that he is happily in love with Susan and that he will never have a future with Samantha again. But a life without Justin is just unthinkable for Samantha, and she has even gone so far as to form a friendship with Susan under the alias Magda to get closer to the couple.

Susan, who knows about Justin’s problems with Samantha, is shocked when Justin tells her that Samantha has duped her and that Samantha and Magda are the same person. “Justin pops in at Susan’s office at Atlantic Adrenalin just after ‘Magda’ has visited her and given Susan a proposal for a fund-raising initiative. Justin sees the envelope with the proposal and immediately recognises the handwriting as Samantha’s. He realises that Samantha is playing games, and he tells Susan that he smells something fishy,” says Eden.

Catch of the day

Justin is steaming about Samantha’s betrayal and wants to go to the police, but Susan stops him and points out that they don’t really have any evidence that Samantha has done something illegal for them to make a case against her. Susan suggests they rather confront her, so Susan lures ‘Magda’ to Atlantic Adrenaline. “Susan tells ‘Magda’ that she wants to talk about her proposal. When Magda arrives, they talk about this and that, and just when Magda is at ease, Susan tells her it’s a pity that Samantha is such a liar!” reveals Natasha.

Samantha is caught off-guard and rushes out of the shop. But while Justin and Susan think they’ve taught her a lesson, Samantha soon tells them both something that makes them freeze with shock. “Samantha says when she and Justin were a couple, she was pregnant with his baby and he forced her to have an abortion,” says Eden. Susan tries to make sense of what Samantha is saying, and she can’t help but wonder whether Samantha could be telling the truth.

Justin feels caught up in a nightmare. “It's horrible because Justin thinks that Samantha is just making up stories to get sympathy. He is in a corner, and he doesn’t know how to prove that she is lying,” says Eden. And the fact that Susan doubts him creates conflict between the couple. Justin can’t understand why Susan can’t take his word over Samantha’s…

As the couple struggle over the truth, Samantha perfects her plan to make Justin hers while she talks to 1 of her dolls, calling the doll “Mommy”. Yip, by now it’s clear now that Samantha is deeply disturbed.

Justin lands himself in trouble again when he is caught in CCTV footage from the Suidooster Centre having a heated argument with Samantha during which he grabs her by the arm. “His boss at Oos Wes restaurant, Bridgette (Denise Newman), finds his behaviour inexcusable. He can’t sort his personal problems out at the centre and treat someone like that. Justin tries to explain, but Bridgette isn’t interested in his side of the story, and he gets a written warning,” says Eden.

But when Justin apologises to Samantha for his behaviour, it only sparks Samantha’s hope that there may still be something between them. “Justin again tells her she is crazy if she thinks they can be in a relationship again,” says Eden. And that stirs something deep inside Samantha.

Then Susan goes on a hiking tour for work, leaving Justin behind as prey for Samantha. She doesn’t waste a minute. She drugs and abducts him! If only Susan knew how much her boyfriend needed her. Because we have no idea what “mommy” is going to tell Samantha to do to Justin…

Rhafiek (Irshaad Ally) might think that he is deeply in love with the architect Yasmeen (Shamilla Miller), but he isn’t being completely honest with himself. When his best friend, Kaashifa (Jawaahier Petersen), confesses out of the blue that she’s in love with him – to stop him from moving to Durban with Yasmeen – he realises he feels something for Kaashifa too. But Yasmeen is also Kaashifa’s best friend and Yasmeen won’t let him go just like that!