Twin trouble in Suidooster S7 | Watch it on DStv 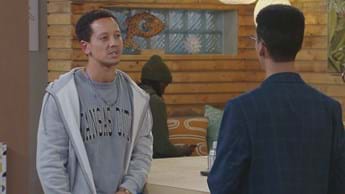 Zoe (Lauren Joseph) simply can’t get a grip on her colleague, Donovan (Marvin-Lee Beukes), and the relationship he has with her aunt, Bridgette (Denise Newman), in Afrikaans soapie Suidooster (Mondays to Fridays at 18:30 on kykNET, DStv channel 144).

“Zoe sees him as a threat and a gold digger,” says Marvin-Lee, and because of that, Zoe goes digging into his life, turning up his twin brother, Greg (also played by Marvin-Lee).

“Donovan and Greg differ like day and night,” says Marvin-Lee. “Where Donovan is sophisticated, educated, ambitious and successful, Greg is a struggler whose life doesn’t have much direction.” And when Greg makes his appearance in November, he won’t only interfere in Donovan’s life, but in Bridgette’s as well.

PS: Hate the wait with this sensational storyline? Get early access to brand-new episodes of Suidooster Season 7 on Catch Up via the DStv app or on your internet-connected DStv Explora. You’ll be able to see all this season’s action a day ahead of the channel premiere!

What Zoe doesn’t know is that Donovan has been ignoring his brother’s calls for some time. But thanks to her meddling, he eventually agrees to meet Greg in Ruiterbosch. “The meeting is awkward and stiff,” says Marvin-Lee.

The two brothers’ relationship broke down over the years when Donovan outgrew Greg. “Donovan wanted to make a success of himself, where Greg didn’t seize the opportunities around him, and they became strangers.”

A diamond in the rough

Meanwhile, when Bridgette hears that Greg came to her office to ask for money, Zoe and her husband, Tim (Marco Spaumer), seize the opportunity to try extract information from him about his brother.

“Bridgette and Donovan know that Tim and Zoe don’t approve of their relationship,” says Marvin-Lee. "But if they think that Greg will throw his brother under the bus, they should think twice. Greg and Donovan may not be close, but they don’t hate each other.”

Later, Greg reaches out to Donovan to rebuild their relationship, but Donovan isn’t willing to do that. Shortly after the two brothers have a fight about that, it looks like Greg stole Bridgette’s diamond earring! Or maybe a certain someone with a mean motive made him look guilty…

Ever wondered how one actor plays identical twins? Suidooster’s PR, Wilmer Müller, reveals: “Marvin-Lee plays both characters, but with clothing, make-up and hair styling we create a distinction between the two characters’ appearance.

Then, of course, Marvin-Lee’s acting is central to the way the twins’ different personalities are portrayed – Greg’s accent and vocabulary differ from Donovan’s more sophisticated way of speaking. Scenes in which Greg and Donovan appear together are shot twice, allowing Marvin-Lee to play both characters. There is a body double for these scenes, where the camera shots happen over his shoulder. Smart camera and editing techniques are also used.”

Watch Suidooster Season 7 Mondays-Fridays on kykNET (DStv channel 144) at 18:30 and on Catch Up