Matters of the heart in Binnelanders 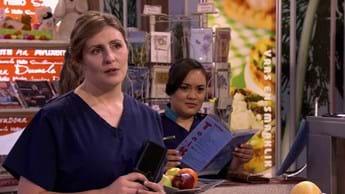 Dr. Steve’s (Clint Brink) life has changed drastically following the death of his fiancée, Dr. Elana (Ilne Nienaber), in July this year on the Afrikaans soapie Binnelanders. He is trying his best not to dwell on the tragedy and still wants to be the best possible doctor as well as the most wonderful dad for his adopted kids, Vicky (Roxanne Bornman) and Ruan (Caiden Bouwer).

In October, we met the general practitioner Janneke Stuurman (Roeline Daneel) when she stepped up to help Steve with his fatherly duties. Janneke is the mom of one of Vicky’s school friends, and she quickly saw that Steve was drowning. It was obvious that she liked Steve immediately, but she concealed her feelings because Steve’s elder daughter from his previous marriage, Lexi (Kisha Skeï), definitely didn’t approve of Janneke being in their life.

Now that Janneke is back working at Binneland Clinic’s casualty wing, hiding her feelings will be trickier than keeping her distance.

Steve and Janneke bump into each other at the hospital lift and start chatting in late November. It’s all very innocent, but Oom Wimpie (Paul Lückhoff), who also happens to like Janneke a tad too much, sees something special in the interaction. He tells Steve that he can see it didn’t take Steve long to move on after Elana’s death.

Clint reveals that Wimpie’s remark rubs Steve the wrong way. “He feels as if Oom Wimpie is minimising the love he had for Elana. Elana was his everything, and obviously he didn’t just move on. He feels offended!”

When Steve confides in his colleague and friend, Annelize (Cindy Swanepoel), though, Annelize has sound advice for him: Don’t close yourself off from the idea of finding love again…

With Janneke now spending more time with Steve because they work at the same hospital, their feelings grow. Janneke even handles a situation with Vicky, helping the little girl with make-up for a school concert – something Steve didn’t know how to do. And when Janneke and Steve are alone in his loft, she reads a moment wrong and tries to kiss him!

“Steve immediately stops her,” says Roeline. “Janneke feels very shy and doesn’t know what to do. For the rest of the week she tries to avoid him like crazy.”

“It’s a difficult situation as he is still mourning Elana. But he doesn’t want to let a change at love slip through his fingers,” explains Clint.

But just as things are starting to look rosy, some incidents in the casualty department cast a shadow and a question mark over Janneke.

Janneke and nurse Naomi (Je-ani Swiegelaar) treat a patient in casualty, but something goes wrong and the patient goes into shock. “It has to do with the iron IV (drip) and it seems the doses that the patient was given may have been too high,” explains Roeline.

Janneke blames Naomi for the mistake, because Naomi has been distracted due to her IVF hormone treatment. Naomi apologises and accepts that she did something wrong with the IV. “She says that she’s sorry, and Janneke assures her that they’re in this together.”

Later Janneke is busy intubating a patient and asks Dr. Uys (Gehard Steyn) to finish the intubation. But she might have already botched the procedure and caused permanent damage. Dr. Tertius (Reinardt Hugo), co-owner of the casualty wing, confronts Janneke about what went wrong, and this time she blames Dr. Uys. Roeline admits that Janneke is in over her head. “She didn’t handle that procedure correctly. But she can’t afford too much focus on it.”

Maybe Janneke isn’t the right woman for Steve, because yet another problem arises at casualty when she treats a patient and decides that further tests aren’t necessary. Naomi sees this and privately questions the decision, especially after she sees how Janneke changes her tune when she talks to Tertius about the patient. It’s only after Tertius asks Janneke about the patient’s symptoms that she suddenly schedules tests…