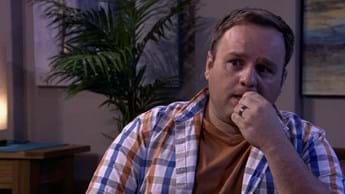 There are a thousand questions bouncing around in Louis Koster’s (Germandt Geldenhuys) head when he learns that he’s the biological father of Delia’s (Odelle de Wet) unborn baby on kykNET’s (DStv channel 144) Afrikaans soap Binnelanders. He definitely didn’t have an affair with her, so how could this possibly have happened?

“The laboratory made a mistake,” explains Germandt. “Louis and his wife, Naomi (Je-ani Swiegelaar), went for IVF treatment in March, but Louis’s sample was wrongly used when Delia was inseminated in August. She was supposed to be impregnated with the sample of her late husband, Malan Koster (Paul du Toit), but there was a mix-up. And to add insult to injury, Louis is Malan’s uncle!”

Meanwhile, Delia has gone missing since she learnt the paternity of her baby, and everyone is desperate to find her…

The story is complicated for all involved. Louis reaches out to At’s son, Conrad (Hykie Berg), who is his nephew and confides in him. “Initially Conrad thinks that Louis slept with Delia and he lashes out at him,” says Germandt. “But when Louis explains the situation, Conrad immediately flips to business mode and wants to sue everyone involved – from the lab, to Dr. Butler (Michelle Bradshaw), Delia’s gynaecologist, who broke the news to Louis.”

When Conrad clams down, he also tries to find Delia, but that’s easier said than done. And while the search is ongoing, Louis makes it clear to Dr. Butler that Naomi shouldn’t find out about their predicament at all. “Louis is still battling to make sense of it all. But there’s one thing he’s certain of: Naomi must hear the truth from him, and no one else.”

The past couple of months Naomi just hasn't been herself. She and Louis decided to go for another round of IVF because she desperately wants a family of her own. “The hormone treatment doesn’t do her good,” says Je-ani. “She is tired and irritable. And it’s of great importance to her to get pregnant this time because she simply can’t bear the disappointment again if the IVF should fail. It’s incredibly expensive as well, and Naomi told Louis that this is the absolute last time that they’re going to try for a baby.”

When Louis finally gathers the courage to tell Naomi that he is the father of Delia’s baby, it’s Naomi’s turn to be confused. “Naomi is shocked, confused and doesn’t know how something like this can happen in modern times. And when Louis explains the mistake the lab made and that he asked Conrad’s help, something else also bothers her: Why did Louis tell Conrad about the mishap before he told Naomi, his wife? It hurts her that Louis placed his trust in Conrad and that he didn’t come to her,” says Je-ani.

Odelle says that Delia’s worst fear is now realised. “She didn’t want it to be public knowledge that she’s carrying a Koster baby. At least if it was Malan’s, she could still stand up against At not to take the baby away from her since Malan is dead. But now it’s Louis’s baby and he is in the picture, and it’s all one big mess!”

Delia fled with help from her colleague, Rian (Erik Holm), CEO of Southern-Hope Hospital, Binneland’s sister hospital. But with Louis constantly calling her, she realises that she can’t avoid him forever.

Later Delia reaches out to Louis and, with great difficulty, he convinces her to meet and talk about their predicament. “Things are extremely awkward between them,” says Odelle. “Delia is scared, but Louis does his best to make her feel safe. Unlike his brother, At, he doesn’t threaten her and tells her he won’t do anything against her will.”

Germandt echo’s Odelle’s words: “There is a very nice moment between them that is soft and gentle, but then something goes wrong…”

Will Delia flee again? Or will Delia, Louis and Naomi somehow become one happy family?

The most important thing for At is family and he will do anything – absolutely anything – to protect his legacy. At has never liked Delia, and often said he didn’t know what his son, Malan, saw in her. But now At is also going out of his way to find Delia. “At makes things even more difficult,” adds Germandt. “In At’s typical way, he is on the warpath, and he will threaten, bribe and twist arms to get his way. He will also get the help of his lackey, Piet (Deon Coetzee), to solve the problem. But this approach won’t work well for At, since it will make Delia only more determined to stay away from the Kosters.”

Germandt reveals that he thought the writers were joking when he heard that his character is the father of Delia’s baby. “I was astonished. I laughed and didn’t want to believe them,” he says. “Only when they told me the 3rd time and insisted they were serious, did I ask how it’s even possible.”

The writers explained the storyline and then Germandt got interested. “I was intrigued and that night I Googled if there have been cases like this – and there have been! It’s not common, but it does happen!”