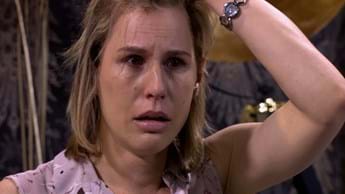 Delia (Odelle de Wet) is fighting for her life on the kykNET (DStv Channel 144) Afrikaans soap Binnelanders. The manager of Southern Hope hospital was lured back to Pretoria earlier in February, from Abu Dhabi where she was hiding from the Kosters after it came to light that she’s pregnant – thanks to an IVF accident – with Louis Koster’s (Germandt Geldenhuys) baby. “She’s back in Pretoria because a guy named Tommy (Pieter Human), a porter at the institution where her dad lives, phoned her to tell her that her dad escaped from the institution and is in danger,” explains Odelle.

Despite being close to her due date, Delia rushed to South Africa. But when she reached the place where she was told her dad would be, she instead found Tommy’s body – covered in blood. “She got a huge fright. And then fate took a bad turn, and she went into labour,” says Odelle.

Delia’s only thought was to get to Binneland Clinic as quickly as possible to safely give birth to her daughter. But there are complications. And now becoming a mom isn’t the only challenge that Delia is facing.

Look after our child

“Louis tries to figure out what happened when he hears that Delia is not only back in the country, but in Binneland of all places, and she wants to see him,” says Germandt. “When he visits her, she only manages to utter a few words before she needs to undergo an operation, but she tells Louis that he and his wife, Naomi (Je-ani Swiegelaar), should look after their child if something happens to her. She doesn’t want At Koster (Hans Strydom), Louis’s brother, to get his hands on their daughter at all,” adds Germandt.

Even after Delia survives the operation and starts to recover, she’s not out of the woods. “Louis is glad that Delia is alive, but he is now worried what it will mean for him and Naomi and what their role would be in the baby’s life,” adds Germandt.

Meanwhile, Delia’s dad is found and she thinks it’s time to take her future into her own hands. “She calls Conrad (Hykie Berg), Binneland’s big boss and At’s son, to her room and confronts him with her suspicion that he was the person that lured her back to the country with a false story about her dad – all because At can’t stand the fact that she has a Koster baby that she wants to keep out of the Koster hands,” says Odelle.

Conrad denies this strongly, but he isn’t so sure that his dear dad is innocent. But when he talks to At about the situation, At also claims to know nothing about the mysterious call.

Now Delia is slap-bang in the middle of all the Koster drama that she was desperate to dodge. After At meets the baby, he wants to talk to Delia about her daughter’s future, but Delia refuses to allow him to have anything to do with her. Louis is also furious when he hears At is sticking his nose in the baby business again. “He talks to his brother and tells him that he keeps on making things worse and that it is putting Louis’s relationship with his child in jeopardy every time At gets involved,” adds Germandt.

Louis tries to talk to Delia to see if they can agree on how to raise the baby, but then police storm into her room – and she gets arrested for Tommy’s murder! “Delia doesn’t know which way to turn, and again she thinks that At is behind this whole ordeal,” says Odelle.

Louis is upset when he hears Delia is planning to take their daughter with her to prison should she get locked up. “It’s another shock he has to deal with. Because Delia is fragile, he tries to talk to everyone that she would listen to, to convince her to leave the baby with him and Naomi should she go to jail. They will look after her with loving care until Delia’s case is closed,” says Germandt.

But Delia is arrested the moment she is discharged from hospital, and just like she said she takes her daughter with her…

Let’s see what At does with a Koster baby behind bars!

Delia hasn’t cornered the market on drama at Binneland! A mysterious illness has broken out at the clinic, patient after patient gets sick. Dr. Annelize (Cindy Swanepoel) orders different tests to be done, and everything shows that it may be cryptosporidium. Dr. Uys (Gerald Steyn) explains that people who drink contaminated water are the most likely to get the crypto parasite. It can happen when a contaminated person or animal decomposes in water, or when there is human or animal faeces in the water. “Annelize hurries to the hospital boss, Conrad (Hykie Berg), and convinces him to test Binneland’s water, but there is no sign of crypto,” says Cindy.

Then Annelize also falls ill and she’s placed in quarantine, along with the paramedic Danny (Bradley Olivier) who also gets seriously ill. “Annelize gradually starts to feel better, and she puts her head together with Danny to try think what the source of the outbreak might be.” But when Danny has a setback that puts his life in the balance, it becomes a life-or-death race to find the answer.