Coming up on Binnelanders this November – Watch it on DStv

Coming up on Binnelanders this November 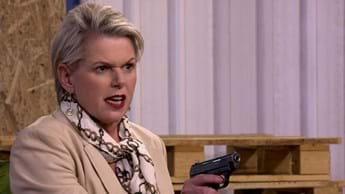 Keep your heart pills and blood pressure cuff closeby when you tune in to Binnelanders this November, because we diagnose drama with a capital D.

Paramedic Danny (Bradley Olivier) in kykNET’s (DStv 144) Afrikaans soapie Binnelanders, is sucked deeper into his family’s underground drug business this November. He wants nothing to do with it, but his mum’s partner Nadine (Margit Meyer-Rödenbeck) has a firm hold over the man because of the threats she has made towards his girlfriend, nurse Chanel (Lindsey Abrahams). Danny is desperate to get out and he might just get that opportunity when a big meeting takes place in the drug world.

Tracy (Melinda Viljoen) gets closer to doc Steve’s (Clint Brink) adoptive son Ruan (Caiden Bouwer) as they work together on a fundraiser for twins going in for an operation, and there is drama when Delia (Odelle de Wet) returns from overseas with big plans for the new ER.

A gun and a raid

Danny is forced to end his relationship with Chanel as Nadine puts more pressure on him to play drug courier with his ambulance. “Nadine has pushed him into a corner,” says Bradley. “And because of that, he must break Chanel’s heart in order to keep her safe.” Danny tries to convince Nadine that he and Chanel are history so that she can stop using Chanel as a bargaining chip, but Nadine is not so easily convinced.

Later, Danny tries to turn the tables on Nadine when he seeks help from Detective Jenna (Monique Rockman). They organise a raid when all the drug lords are under one roof for a secret meeting. But Nadine smells a rat and pulls a gun on Danny just as the raid starts - and then she ends up being wounded! How will Danny get himself out of this mess!?

Secretary Tracy has come a long way from her life as a stripper and blackmailer. She has reinvented herself and has a happy life now and is even dating Binneland clinic CEO Conrad (Hykie Berg).

She loves a good cause and that is why she teams up with Ruan to hold a fundraiser for the twins that Steve will operate on. Steve, on the other hand, is not happy that his son is spending time with Tracy. He has not yet forgiven her for drugging him and accusing him of sexual assault two years ago. “It’s hard for him to just move on and forgive, he wants Tracy to stay out of his way and that of his family, but it’s easier said than done,” says Clint.

Meanwhile Ruan becomes aware of Steve’s frosty demeanour towards Tracy and because Steve doesn’t want to tell Ruan what the problem is, Ruan goes surfing on the internet for information on Tracy and what he finds makes his blood boil.

Hospital executive Delia is back from her trip overseas, and she is extremely excited to break ground on Binneland’s new ER. “She is eager to breathe new life into Binneland’s ER with cutting edge technology and patient-friendly strategies that will make them one of the most successful ERs in the country,” says Odelle. But there is one problem – Conrad is not willing to use Binneland clinic’s profit to fund the “Super ER”.

Delia is not going to stand his foot dragging and she swiftly makes other plans to secure funds, but her “work baby” might have to take a back seat as she experiences some pain and discomfort which puts her pregnancy at risk…

What happens next? Watch Binnelanders this November for all the drama.