Binnelanders Season 11 | Watch it on DStv

Is this the end? 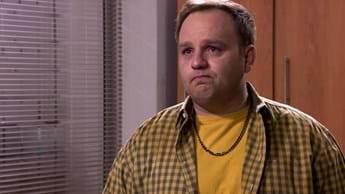 Louis (Germandt Geldenhuys) and Naomi’s (Je-ani Swiegelaar) marriage is on rocky ground on the kykNET (DStv Channel 144) Afrikaans soap Binnelanders. It’s been groaning under the weight of change ever since Louis asked Naomi to take over all his responsibilities at his business, Doepa, in January so that he could shift his focus to establishing and growing his singing career.

While Louis has been busy performing or recording in studio, Naomi has turned to her ex-fiancé, Kobus (Robbie Wessels), the man she hired to carry out renovations to Doepa and also the couple’s own home.

Louis was upset when he found out that Kobus had wiggled his way back into their lives again and it has led to argument after argument between the couple. Eventually Naomi decided that enough is enough and she moved out to get some space and perspective. Now it’s on Louis to see if he can gain her trust again, or whether her future is with Kobus. “After all, she will always have a soft spot for Kobus,” hints Je-ani.

And they aren’t the only couple in crisis on Binnelanders right now. Read on to see who has some homework to do before Valentine’s Day!

Working on their marriage

Joline (Rika Nieuwoudt), Naomi’s cousin, warns Louis that he should stop his nonsense and treasure his marriage, but it may be too late. “Louis hears what Joline is saying and he knows that he has to figure things out with Naomi and get her to come home. But at the same time, he is a bit bitter because it was Joline who pushed him to chase after his singing career,” explains Germandt.

Meanwhile, Naomi reaches out to Kobus and calls him at the shelter for homeless people where he stays, to ask him for advice on her crumbling marriage. “Kobus listens to her with sympathy. He cares about her a lot and because he doesn’t want to come between her and Louis, he encourages her to forgive Louis,” says Je-ani.

As a result, the couple’s next conversation is a step in the right direction.

“Louis tells Naomi that he did some introspection, and he knows he neglected her and shifted all his responsibilities on her. And that was wrong,” says Germandt. He hopes they can start on a clean slate. And with Kobus’s words ringing in her head, Naomi decides to forgive Louis and move back home.

With Naomi at home, Louis knows he has to tread carefully to not mess things up again. But when Louis gets the opportunity to perform a concert in Cape Town, he also knows that he can’t let it slip through his fingers. “Louis desperately wants to go, but he doesn’t want to put his career ahead of his marriage again,” says Germandt.

Louis talks to 1 of Naomi’s friends, nurse Chanel (Lindsey Abrahams), and asks her what he should do in this sticky situation. She suggests that he ask Naomi to go with him and make it a special occasion since her birthday falls on the weekend of his concert. Louis thinks it’s a great idea, but when he tells Naomi about it, she gets so excited that she doesn’t give him time to finish his story. Poor Naomi never gets to hear that she’ll have to take a back seat to his upcoming show…

Bubbly with excitement, Naomi discusses her birthday weekend with Chanel. “Chanel listens carefully and because she’s under the impression that Louis told Naomi everything, she asks Naomi how she feels that Louis is doing a concert there too.” Naomi is shocked when she realises she didn’t know the whole truth about the reason for the trip and when she confronts Louis, she tells him that he can go alone, as he is once again putting his marriage second to his career.

Louis winds up going to Cape Town alone, but before he leaves, he sort-of straightens things out with Naomi. It’s not enough to silence his guilty conscience, though.

When Naomi’s birthday weekend finally comes, though, it turns out very differently than she thought and there’s a new sparkle in her eyes when we see her again. Is Louis going to do something to make it up to her? Or is it Kobus who’s arranged a surprise that makes her lovely smile shine? Wait and see!

What a dilemma! Elise (Lindie Stander) agreed to marry Reverend Wynand (John-Henry Opperman), but she doesn’t want a traditional wedding – no surprise there! She wants a braai and to walk down the aisle in a red suit…

That’s not the only wrinkle in these wedding plans. It looks like the good reverend can’t keep his eyes off Elise’s best friend, Annetjie (Lorraine Burger).

1 thing leads to another and Wynand asks Annetjie to marry him – even though Elise is still planning their wedding. Annetjie tries to avoid Wynand because she doesn’t know what to do and doesn’t want to hurt Elise, but Wynand determinedly confesses his undying love to her. “Annetjie is torn in 2,” admits Lorraine. Now who knows how the unpredictable Elise will react to that news?