Delia returns to Binnelanders Season 11 | Watch it on DStv

Delia: On fire and inspired 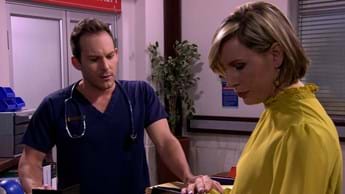 Binneland Clinic is buzzing this month in the Afrikaans soapie Binnelanders and Delia (Odelle de Wet) is making the most noise.

“Delia is back from overseas, and she is on fire for the new casualty unit that she briefly started working on in August. She got a lot of inspiration overseas from the different hospitals she visited, and now she can’t wait to break ground,” says Odelle.

When Delia arrived in Pretoria at the end of October, her friend and the co-owner of casualties, Doctor Tertius (Reinardt Hugo) was the first person she called and informed about her big plans, but when Conrad (Hykie Berg), the hospital’s CEO, hears about it, he doesn’t share Delia’s enthusiasm.

“Delia needs funds to have the unit built, but Conrad refuses to give it to her,” Odelle reveals. That doesn’t stop Delia from striving to get her way – but the stress could see her wind up as a patient in the very hospital she is trying to improve, and put her unborn baby at risk.

And why? So that Conrad Koster can hoard more profits.

Before the pregnancy pain rears its ugly head, Delia shares her new plans for the casualty unit with the Binneland board. “Everyone listens intently, but she realises that something strange is going on – especially when she gets opposition from Conrad because he doesn’t want to use Binneland Clinic's profit to fund the project,” says Odelle.

She tries to get answers from Annelize (Cindy Swanepoel), but they have never gotten along. “And to make things worse, Delia is shocked to find out that Tertius and Annelize are a couple again,” says Odelle. “Delia isn’t in love with Tertius, but Tertius is one of the few friends she has at Binneland, and now she can’t even complain to him about Annelize, who irritates her.”

Eventually, Delia gets answers from Doctor Brandon (Zane Meas), one of the board members, about the hospital’s new profit policy. “She’s shocked to hear that the profit is no longer being used to invest in the hospital, and that it is now in Conrad’s coffers to increase the Koster legacy,” says Odelle. She confronts Conrad about it and they end up in a heated argument.

Rian is also back

In the meantime, Rian (Eric Holm), the CEO of Southern-Hope Hospital, Binneland Clinic’s sister hospital, arrives in Pretoria and Delia approaches him to become part of her plans for the casualty unit. “Delia thinks Rian, with his experience in the hospital sector, will help a lot and he can also help create an app for the unit,” says Odelle.

Later, Delia and Tertius have a meeting with Blue Cor, a company that can invest in the casualty unit. “Everything goes well with the meeting, but then Delia suddenly experiences pain and there is concern about her pregnancy,” says Odelle. Could Delia lose her baby? And with her pregnancy at risk, will she be able to continue her fight to help Binneland Clinic to save more lives?