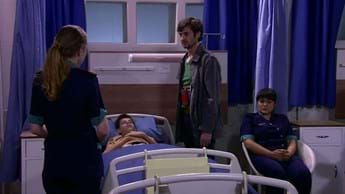 Dr. Martin Prins (Keenan Arrison) has ambition. He wants to make a difference in the world, and he thinks Binneland Clinic is just the place to do it on the kykNET (DStv Channel 144) Afrikaans soap Binnelanders. The medical world is abuzz about the new Super ER that will be built at Binneland – a new casualty unit – and Martin believes being part of this will strengthen his profile. Now he just has to convince the CEO of Binneland, Conrad (Hykie Berg), to make him a partner. But before he can get his feet under the operating table, he’ll have to get over his feelings for the nurse Chanel (Lindsey Cele). Complicated? Let’s throw in a hostage situation and a crying baby to give Dr. Prins a splitting headache this March!

When Martin arrives at the hospital earlier than he is expected, he immediately seeks out Conrad. He asks straight out what his chances are to be a more permanent feature of the Super ER through a partnership, and whether he can start a practise there. “Martin thinks he can carve out a career for himself in Binneland and he sees a bright future ahead of him,” says Keenen. Conrad is taken aback by Martin’s proposal but promises to consider it.

Chanel is also caught on the hop when she hears that Martin is back and that he is going to move into the cottage at the Ferreira house where she is staying. “Chanel and Martin grew up together and she’s always seen him as a family friend,” Lindsey reminds us. “But the last time she saw him (November 2021) before he left for Cape Town, she tried to kiss him just after she broke up with her then-boyfriend, the paramedic Danny (Bradley Olivier).” Keenan adds: “Martin realised it was a rebound effect and he didn’t want to be Chanel’s rebound.”

Before Lindsey knows what to say, Martin is confronting her in the corridors of Binneland to try to clear the air. Chanel apologised profusely for the kiss, but things were awkward between them and now Martin wants to get them on an even keel. And it’s not long before everything is straightened out and he even makes her laugh out loud for the first time in months when they chat at the Ferreira house.

Things are a bit chaotic at the Ferreira house with baby Amalia (Lily van Niekerk) that’s now staying there and cries a lot. When Marin sees that Chanel has made a bed for herself on the couch to get some sleep, he feels bad for her and takes her to the garden flat so that she can have some uninterrupted sleep. “Chanel appreciates his sacrifice, and she thinks she feels a vibe between them that is definitely more than friendship,” says Lindsey.

Meanwhile, back at the hospital it’s clear Conrad is still not completely convinced to make Martin a part of his business. “Martin tries to win Conrad’s trust and convince Conrad that he will be a team player,” says Keenen, but it may not be enough – that is, until Martin gets the opportunity to show his loyalty…

Next, Martin asks Dr. Hugo’s (Cobus Rossouw Jr.) advice on how he can sway Conrad to get the buy-in. “Hugo encourages Martin to not give up. And while they’re chatting, Martin also voices his concerns to Hugo about a patient’s dad, Kurt (Jacques Theron, a newcomer). He is Emil’s (Thommi Swanepoel also a newcomer) dad and Emil is suffering from severe epilepsy. Kurt wants Martin to perform a dangerous operation on Emil but Martin feels some other treatment will work better, even though Kurt doesn’t want to hear this – he wants the operation and his son to be cured,” reveals Keenen.

With renewed confidence, Martin approaches Conrad yet again and they agree on a 3-month trial partnership, which excites Martin. “He wants to share the news with Chanel and when he finds and talks to her, he blurts out that he has feelings for her,” says Keenan. Chanel is speechless and asks him if they can discuss it later. But she doesn’t know “later” may not be an option…

Distraught dad Kurt has reached his limit and he takes Chanel and a few other staff hostage! Like Martin, he is desperate to make a deal, and he won’t take no for an answer.

We all have demands!

Martin gets worried when he doesn’t hear from Chanel. Kurt, meanwhile, starts making demands to Conrad: If someone doesn’t operate on his son, he’s going to blow up himself, the hostages and a part of the hospital!

“Martin is deeply concerned when he learns that Chanel is among the hostages. Because he doesn’t want anyone to get hurt, he worms his way into the situation and tries to convince Kurt to take him hostage but release Chanel and 1 of the other personnel,” says Keenen. Kurt agrees, but something – watch for yourself – goes wrong. When Kurt loses his temper, it’s explosive! It’s clear Conrad and the others are on dangerous ground, but maybe Conrad’s “new partner” is just the person to make the most of the opportunity to win his place in the Super ER and in Chanel’s heart.

That’s 1 heck of a job interview!

Louis (Germandt Geldenhuys) and Naomi (Je-ani Swiegelaar) never thought they would have a family like this, but here it is: baby Amalia is living with them. Delia (Odelle de Wet) accidently got impregnated with Louis’ sperm through IVF while Naomi was also undergoing IVF treatment, as Naomi is desperate to be a mom. But it pains Naomi to see baby Amalia in Louis’s arms and know that’s not her baby…

With Delia in jail on murder charges, Louis is looking after Amalia with little help from Naomi at first. “Naomi feels left out. She feels Louis and Amalia are a family now and she doesn’t fit it,” explains Le-ani. “Naomi’s heart is sore because she wanted her own family with Louis with their own kids, and to now see how Louis is sharing his bed with Amalia is difficult for her to accept.”

Naomi tries to distance herself from the baby, but Louis is getting more and more overwhelmed with the newborn. After they finally have a long talk about the situation, Naomi’s heart starts to melt and she tries to see Amalia as a blessing. But she’s still reluctant to become too attached… Delia will probably be out of jail soon, and then they will have to give Amalia back to her mom…