Coming up on Binnelanders this October | Watch it on DStv 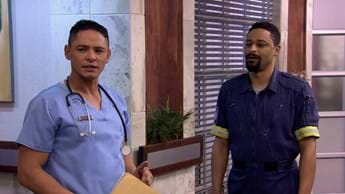 Nurse Chanel’s (Lindsey Abrahams) life is in grave danger when she’s kidnapped by patient Roelf (Ashley Taylor), who ends up being a serial killer and it will be up to Danny to hopefully save her before she becomes Roelf’s next victim!

Doc Annelize’s (Cindy Swanepoel) love life is also in the spotlight as she starts dating Xander Stassen (Ivan Botha), who’s back working at Binneland clinic for a while. And we meet three new characters who will shake things up.

Gone without a trace

Paramedic Danny finds himself in a dangerous situation with his girlfriend Chanel’s disappearance. Ever since he brought Roelf and Max (José Domingos), an amateur detective, into the casualty department in September, everything has gone haywire. From Roelf pulling the wool over their eyes and convincing them that he is the sleuth and Max the serial killer, to Roelf kidnapping Chanel when they got too close to the truth about who he really is.

Now Chanel is in trouble and Roelf has a long list of demands he wants fulfilled before he hands Chanel over… if he hands her over at all!

Annelize hasn’t had any luck when it comes to relationships, and this time things are even more complicated with three men interested in her.

Currently she’s dating Xander, and as a couple they have some steamy chemistry. But there is also Doc Stefan (Izak Davel) who she also likes and has a past relationship with. But the only man viewers want her to give her heart to, is her best friend and colleague, Tertius (Reynardt Hugo). They were in a serious relationship back in 2019, which ended on a sour note, but now Tertius is opening his heart to Annelize once again...

Viewers can look forward to three fresh faces in Binnelanders in October.

Detective Jenna (Monique Rockman) makes her appearance at the same time as Nadine (Margit Meyer-Rödenbeck), a ruthless criminal who tries to recruit Danny to help her expand his mom Vida’s (Vinette Ebrahim) underground drug business in Pretoria. Will Danny give in to Nadine’s demands, or will he go undercover for Jenna to bring this criminal empire to its knees? After all, she is threating the love of his life… Keep watching to find out!

Binge Binnelanders from the beginning on Showmax, with episodes straight after they air on DStv.