A woman’s place is on screen 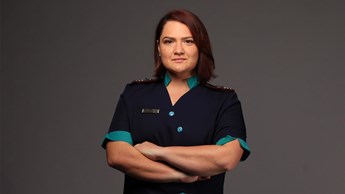 Actress Je-ani Swiegelaar walked onto the set of Binnelanders in August 2012 as Nurse Naomi. Before she started filming though, she had unfinished business to tend to. “I still remember the day well,” says Je-ani, adding “I asked the producers nicely if I could only shoot scenes in the morning, because I still had to complete my last few weeks as a teacher at a crèche. My stomach was filled with butterflies.”

Apart from the first day jitters, Je-ani recalls the awkward encounter she had with co-star Desiré Gardner, who plays Nurse Daleen. “I went on about how we studied together and how happy I was to work with her but Desiré’s response wasn’t quite enthusiastic, because she couldn’t remember me at all,” adds Je-ani. It’s now something Je-ani and Desire laugh about when they hang out together. Ten years later, Je-ani is still with Binnelanders.

To celebrate her milestone and Women’s Month, we spoke to Je-ani about her time on the medical soapie.

Naomi’s storylines leave a lasting impression on viewers, as they highlight women’s issues. The nurse has overcome many obstacles such as when her ex-boyfriend Ferdi (Cobus Venter) verbally and physically abused her in 2017. “Viewers sent me messages on social media to say thank you for shining a light on this serious subject. They told me that they hope that their friends and family, who went through similar experiences would hopefully watch the show and reach out for help,” adds the actress.

Naomi was also engaged to rugby player Kobus (portrayed by popular singer Robbie Wessels) in 2015 but they later split. “Ai, those were good times,” sighs Je-ani. “Not a day went by that we weren’t bent over with laughter. Robbie is truly hilarious, and it was delightful working with him.”

In the end, Naomi had her happily-ever-after when she walked down the aisle with Louis Koster (Germandt Geldenhuys) in 2019. “As Naomi [grew], I believe that I’ve also developed as an actress,” says Je-ani. “Binnelanders is a well-oiled machine and if you don’t adjust and evolve, the soapie will chew you up and spit you out. I compare it to the process where diamonds are formed and sharpened under intense pressure. That is what I’ve experienced in my career at Binnelanders so far: this is where diamonds are created,” reveals Je-ani.

The flames & the phoenix

Naomi has had memorable storylines throughout the decade. Fans will remember how she almost burnt to death or when one of her ovaries was diagnosed with endometriosis but Dr. Conrad (Hykie Berg) removed the healthy ovary during an operation. As a result, Naomi not only had to battle with an under-diagnosed condition but she had to come to terms with a devastating personal reality. “It was a dark time for Naomi. It meant that she could not have her own children and it took a long time before she could forgive Conrad,” says Je-ani. Despite the trails, Naomi emerged stronger.

During her time with Binnelanders, Je-ani also had the opportunity to work with legendary personalities who became her TV family. The late and much-loved Ben Kruger played Naomi’s father Okkie and the singer Amanda Strydom was her TV biological mother Belinda. “It is an honour and privilege to have them as my TV parents. It’s still hard to think that Ben isn’t with us anymore after he passed away due to COVID. Sometimes it feels like he’s simply on a production break and one day he’ll show up on set again to join me in filming scenes.”

Watch Binnelanders Season 12 weekdays at 19:30 on kykNET, DStv Channel 144 and on Catch Up