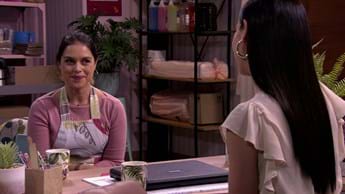 Viewers are still trying to make sense of it all and, in typical Binnelanders style, the solution won’t be easy. But while the Kosters are coming to grips with their latest family foul up, some new – and some old favourite – faces are returning to the soap with their own issues.

In December 2021, Vicky (Roxanne Bornman) will meet Father Christmas in the corridors of Binneland Clinic. Oom Kris (Dawid van der Merwe) is a peculiar man. He is not letting go of the narrative that he is the real Father Christmas – and it’s up to Vicky to figure out whether he is telling the truth or not, especially with the strange things happening in the hospital while he is there …

Elise Kruger (Lindie Stander) is back just in time for a new crisis at Binneland Clinic: The spirit of Christmas has left the building but seems to flourish at its rival, MerciMed Hospital. When Elise brings this to the attention of her bestie, Dr. Annelize Roux (Cindy Swanepoel), the fierce doctor gives the medical rep the task of bringing Christmas cheer back to their hospital. But how on earth is Elise supposed to perform this Christmas miracle? Vicky has an idea – but they will need all hands on deck to pull off the best Nativity play that Binneland has ever seen.

Oom Rodney Maynard-Smith (Wilson Dunster, Meneer van Deventer in the drama series Bloedbroers, now on Showmax) is a frequent visitor at the hospital now that his wife has been admitted again. The poor man is having a tough time with the love of his life in hospital, but he also becomes a shoulder to cry on, and a speaker of the unspoken concerns of many of the characters coming and going in the hospital corridors.

Meanwhile, something is off about Janneke Stuurman (Roeline Daneel, Klara in the drama series Fynskrif, now on Showmax): The new locum just doesn’t seem to get it right when she performs her duties as a doctor in the very busy ER. Does she just lack confidence as a trauma doctor? Is there something that makes her lose focus at the sight of a crisis? Or is she just more focused on Steve Abrahams (Clint Brink), the doc she fancies?

Rika Nieuwoudt reprises her role as Joline Hofmeyr, Naomi’s (Je-ani Swiegelaar) long-lost lawyer cousin. Joline is in Pretoria during the festive season to attend to a very important case, but she is readily side-tracked by Louis and his talent as a singer. Joline is also an ear for Louis and Naomi's individual struggles with their current situation with Delia and her baby, which still feels like a bit of a nightmare for the young couple.

At the start of the new year, viewers finally get to delve deeper into plastic surgeon Dr. Steve’s past as his estranged younger brother, Jared (Gershwin Mias, Zane in the telenovela Arendsvlei), rocks up without warning and ask his big brother for money to pay some outstanding debt. Steve isn’t that willing to just whip out the wallet and asks for some proof of this so-called debt – but then little bro Jared ends up in the ER!

Marissa (Ilse Klink, Dorothy Galant in the telenovela Arendsvlei), Steve’s estranged mother, makes her appearance right at the moment when Steve checks on Jared in the ER. At first her attention is only on Jared, but as soon as she feels an icy stare, she turns around and looks into the face of her first-born, Steve! What Marissa and Jared did to Steve is still a mystery, but it seems the wounds are deep, and Steve isn’t keen on a family reunion. In fact, he wants to keep a lid on the trauma that is boiling up to the surface for as long as possible.

Bronwyn (Kim Cloete, Anne in the drama series Fynskrif, now on Showmax), Steve’s ex-wife, will also make her appearance in January when Steve’s life starts falling apart due to Marissa and Jared’s presence. Bronwyn is there for Steve in his darkest hour and they will spend the night together. But just how far they go between the sheets remains to be seen …

Steve isn’t the only one who will meet his past in the present: Tracy Smith (Melinda Viljoen) has to make peace with who she was and who she has become, when Yolandi (Christia Visser, Lillie in die drama series Die Boekklub), an ex-colleague of hers when Tracy was a stripper, appears from the shadows. Yolandi has a silver tongue that gets her into trouble – or causes trouble – more times than one can imagine! Will Tracy and Yolandi’s “friendship” stand the test of time? Or is there something more sinister at work? When Yolandi flees for her life she can only think of one place (the Koster mansion where Tracy strays) to hide away from the darkness that is following her.

Watch Binnelanders, Mondays-Fridays on kykNET (DStv channel 144) at 19:30 or on Catch-Up