Too late for a love triangle?

Rian declares his love to Annelize, hoping she will dump Tertius to be with him on Binnelanders on DStv! 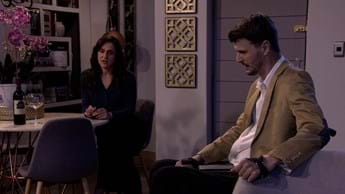 It’s taken a long time for doctors Annelize (Cindy Swanepoel) and Tertius (Reinardt Hugo) to finally let go of their nonsense and admit their love for each other on the kykNET (DStv channel 144) Afrikaans soapie Binnelanders.

Miraculously, they recently accepted their feelings for each other. They’ve started a relationship again and they are happier than ever! But there’s 1 torpedo that could sink their love boat – Rian (Erik Holm), the CEO of Southern-Hope Hospital.

Running away from Love

Rian made his appearance on Binnelanders again at the end of November after running away overseas when things between him and Annelize became too serious in October. “Rian and Annelize had an intimate talk about taking their friendship to the next level. Then Rian got cold feet after Annelize revealed to him how she was dragged down by the previous men in her life who only used her and relied too heavily on her to make their lives better,” explains Erik.

“Rian took this too literally and thought because of his physical constraints and being in a wheelchair, he would only be a burden to Annelize. So he ran away before he could hurt her.”

When Rian broke Annelize’s heart by leaving, he certainly didn’t expect her to find love again so soon with Tertius!

Cindy says there was a time that Annelize had strong feelings for Rian. “But Tertius is now the love of her life and, above all, she has promised him that this time she will stay with him, come what may.”

So it’s deliciously uncomfortable for her when Rian arrives at her apartment on Thursday, 2 December and, after all this time, declares his love for her.

“He admits that he made a mistake and says that he should never have gone overseas. Rian also reminds her that at the time she said he was 1 of the most important people in her life, and he was silly to believe that a relationship between them would not work,” reveals Erik.

Rian’s declaration throws Annelize for a loop. “She’s angry.” says Cindy. “Why is he saying all of this now? It’s too late! Annelize has moved on and is really happy with Tertius, but now Rian is confusing her.”

In the time that follows, Annelize’s emotions are all over the place and she struggles to figure out which man she wants in her life. “It's quite the love triangle she has gotten herself into,” Cindy says with a laugh.

Now the question is: Who is Annelize going to choose, Rian or Tertius? “For now, I can’t reveal that,” says Cindy. “But things are not going to turn out as the viewers think.”