Meet the Puppet Master of Die Byl Season 4. Watch it on DStv

The man behind the monster 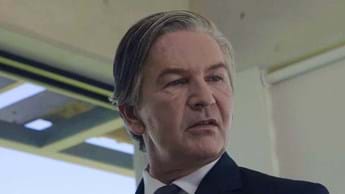 Actor Sean Cameron Michael (52) is one of the few South African actors to have made it in the world of Hollywood. His most iconic role to date is that of Richard Guthrie in the 2015 fantasy series Black Sails, which earned him an Emmy Award nomination. Since then, he has landed more roles in international series, such as MacGyver in 2018 and Deep State in 2019, but he says there is something special about coming home to South Africa and playing in local productions.

“I’ve always been proudly South African,” says Sean. “There is a passionate authenticity and originality to local storytelling. The hard work, dedication and team-player mentality needed – always with budgetary and time constraints – is appealing to me. And it makes my family and friends proud.”

These days Sean stars as the ruthless antagonist Harold Vermeer in the serial killer series Die Byl Season 4, and with each episode and each evil deed he so easily commits, he makes the hairs on our necks stand up.

The Mask & the monster

We first got a glimpse of Harold at the end of season 3 when he wore a horrifying mask while looming over a young trafficking victim in a shipping container. Sean can’t give too much away around the mask and what Harold uses it for specifically, but he reveals that production spent weeks deciding on the perfect mask for Vermeer to wear. “We wanted something that was unique and bespoke, so eventually had it custom-made specifically for the character,” says Sean.

“The mask is a treasured, personal possession for Vermeer. It also has fetish-like connotations that will be revealed later in the series. Vermeer not only wants to hide his identity from his victims, but also instil fear in them – and of course the viewers. I suppose we all hide behind a mask, only for Vermeer it’s literal. And that is just the tip of the iceberg when it comes to what makes Harold tick,” adds Sean.

The pawns and Byl

“Harold believes he is untouchable and will never be caught for his crimes,” says Sean. “And by the high-profile politicians he later surrounds himself with, it appears he may just get away with it. It is clear to him that money and power talks. He is very aware of mankind’s greed.”

Using pawns like Colonel Trotski (Frank Rautenbach) and sniper Jo Verwey (Amalia Uys) is also part of his master plan to infiltrate the South African Police and Army services and make it his own. “Harold has done his research and understands Trotski’s psychological vulnerabilities and desires, he is always thinking three steps ahead and Jo is merely another pawn in his game.” Harold is not worried at all that she is on his tail or that she might be a threat to him and his organisation.

When it comes to the series’ protagonist Colonel Piet van der Bijl, aka Byl (Waldemar Schultz), catcher of serial killers, Harold has a special task for him: He wants Byl to be his puppet for the police and the army, the man they respect and whose orders they will obey, but Byl’s orders will come from Harold. “Harold knows that Byl is loved and respected – and he will use this to his benefit to achieve his ultimate goals. Harold will make it highly personal, with many casualties along the way, to realise his vision of a new South Africa.” But will Harold be able to turn Byl and win his allegiance? “Everyone can be turned if you know their weak points. . .” hints Sean.

Sean started acting professionally when he was 12 years old in theatre productions like The Sound Of Music and The King & I. “In my twenties I did TV presenting on Teleschool, recurred on the soapy Egoli as drug dealer Brett and played the lead in the 2004 drama series This Life. Acting has always been a form of escapism for me. It’s a demanding and challenging career, but also truly creatively fulfilling. It’s a passion and in my blood.” Since starring in Die Byl, he also played a role in a local cult film called Fried Barry (currently on DStv Box Office).

While working on international content is fun, Sean says Die Byl captured his attention. “The quality of the writing of the multi-layered, captivating, intriguing and intelligent storylines, along with the cream of the crop of South African talent assembled was top notch and I therefore knew that I had to bring my A-game to do the already successful, popular and much-loved show.” And an A-game he brought, because Harold is one scary, Dutch-speaking bad guy and we can’t wait to see what he does next.