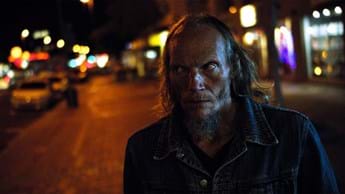 The genre-bending, cult style film Fried Barry starring Gary Green, Chanelle De Jager, Johnny Pienaar, Bia Hartensen and Sean Cameron Michael will premiere on DStv Box Office as a Cinema Premiere on 26 October 2021 in the week leading up to Halloween. Hakeem Kae-Kazim, Steve Wall, Deon Lotz and Tuks Tad Lungu feature in supporting roles in the film, that is the first of its kind for South African cinema .

Fried Barry marks the feature-length directing debut of Ryan Kruger. Kruger is a celebrated director in the country, known for directing music videos for some of South Africa’s biggest artists.

The film centres on Barry (Gary Green), a lowlife, drug-addicted father and husband living in a middle-class nightmare. After yet another bender, Barry is walking home in the dead of night and gets beamed up into an alien spacecraft. He’s subjected to unimaginable procedures and his body becomes possessed by an alien visitor.

The alien takes Barry’s body for a joyride through the strangest and darkest avenues of Cape Town, South Africa. Along the way, he learns about the weird and unforgiving world of humankind.

In the style of a road movie injected with LSD, Barry wanders from place to place getting into all kinds of mischief, ranging from the whimsical to the deranged: from smoking meth and going to a rave, to being subjected to brutal torture and saving the lives of a dozen children. The alien is forced to leave Earth when Barry’s body begins to deteriorate due to the abuse endured on his intense journey. The alien returns to his ship however not without taking Barry and those around him on a ride they will never forget.

The story of Fried Barry began with a 3-minute experimental short film of the same name, that was released in 2019, and attracted over 100 000 views. The concept was simple: a strung-out heroin addict tweaking out in a warehouse after his latest hit.

The simple concept and stylized execution earned the film 59 official selections and 13 awards at film festivals across the world. Additionally, it triggered an outpouring of fan art. 100 artists have crafted their own take on the Fried Barry character in forms as diverse as paint, sculpture, tattoos, digital and even animation.

The short was injected with a harsh energy that surrounds the main character, Barry. His intense performance is heightened with flourishes of severe sound design and snappy editing. With a style that is reminiscent of Chris Cunningham, it grabs the audience’s attention and doesn’t let go until the bitter end. The film promises to take viewers on a similar pulse-rating, high-energy, journey.

Fried Barry was produced in association with the National Film and Video Foundation of South Africa and is being released by Gravel Road Distribution Group in Southern Africa.