Watch the finale of Die Byl Season 4 on DStv

All shall be revealed 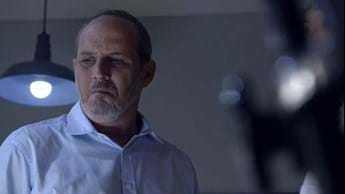 Viewers have gone down a dark and twisted path with each episode of the kykNET (DStv Channel 144) Afrikaans crime drama series Die Byl Season 4.

In the finale 10th episode of the season, set to air on Sunday, 20 March, all will be revealed. The ultimate bad guy of the season, Harold Vermeer (Sean Cameron Michael), will either succeed in his plan to take over South Africa and privatise the Army and Police Force, or Colonel Piet van der Bijl aka Byl (Waldemar Schutz) and his team will put an end to him and his horrifying deeds. But Vermeer has had decades to plot every piece of his master game, and Byl could just be a piece on the board…

What you need to know

Episode 9 (available on Catch-Up) had us chewing our nails as the psychotic cannibal serial killer Len Villiers (Stian Bam) had Captain Lena Evans (Lika Berning) as his hostage and he tried to marry her in a bizarre ceremony in which he wanted to slice open her skull and eat her brains! Yikes!

Luckily, Byl and Captain Juan Stuurman (Marvin-Lee Beukes) stopped him in time and Byl fired a shot at Len, killing him instantly! The corrupt Colonel Trotski (Frank Rautenbach), who is working for Vermeer, rocked up just in time to witness Byl’s shooting of Len and he made it look as if Byl murdered Len without reason, in cold blood. Byl was arrested and a case of murder was opened against him. To make things Vermeer then reached out to the sniper Jo (Amalia Uys), who he has been using as his personal hitman, and gave her her next target: Byl.

In the final episode, Byl and his team are tested to their limit. Not only is South Africa’s democracy at stake, but the Police and Army have become a political playtoy for the evil Harold Vermeer.

“The final episode is going to be explosive,” says Waldemar. “It’s exciting with more action, more evil and more suspense. We hope the viewers will enjoy every moment and the questions they still had will be answered.”

Actress Trudy van Rooy, who plays Medical Examiner Dr. Shani van Rooi, says, “I think that what the viewers will witness in the final episode is the tipping point of a very long and arduous journey for the team. There was a lot of questioning of purpose, meaningfulness and ‘where are we heading’ for each character throughout this season so I think the audience is going to experience the relief of some of those answers alongside each character.”

Sean says with the 10th episode viewers are in for an intense and dramatic rollercoaster ride. “We wrap up and conclude all the storylines leading to an emotional charged and shocking finale,” he hints.

Throughout Season 4, we came face to face with some scary, and in some cases bonkers, serial killers – read all about them below, and see some of the most shocking scenes in Die Byl Season 4 here:

In episodes 1 & 2, Reinhardt was a troubled man who hunted his victims – all loving couples – like animals and slit their throats to free them from their love.

In episodes 3 and 4, Azel took it upon herself to get justice for abused women by taking out the men who abused and, in some cases, raped them and suffered no consequences for their actions.

In episodes 5 and 6, mime street performer Louw was clearly not in his right mind as he cut the most desirable and flawless sections of skin from his victims to make himself a wearable mask of human skin. “I enjoyed this role as it challenged me as an actor and showed the viewers that I can be more and do more than just comedy,” says Schalk.

Actress Lika Berning says her favourite scene was when her character took out Louw when they caught him. “I loved pulling the trigger to kill the masked serial killer Louw. This felt amazing. Lena hasn’t often had a chance to be in the field, or to save the day the way she did here. She is a forensic psychologist and usually sits at her desk studying or figuring things out.”

In episodes 7-9, Len was a psychotic man who became even more mad and quite ill because of his consumption of human brains. He developed an obsession with Lena, kidnapped her and attempted to marry her in a sick ceremony.