New killers in Die Byl Season 4. Watch it on DStv 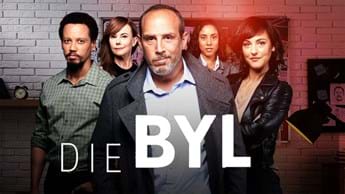 “We all shudder for different things, and because we (Die Byl) focus more on the psychology of the murders and that of the murderers, it’s even more nerve wracking,” says Elmarie Botha, producer of the kykNET (DStv channel 144) crime drama series Die Byl Season 4 . “A person’s imagination is a wonderful thing, and that is what Die Byl does so cleverly: It opens up the viewer’s imagination.”

Season 3 ended on a tragic note with Adriaan the psychopathic serial killer murdering 1 of Byl’s team. Doc Fritz (Eric Nobbs) the pathologist was part of Byl’s elite unit investigating serial killers. Adriaan targeted Doc to take revenge on Byl for shooting his mother during a raid back in the day. Adriaan was orphaned that day and while he was moved from home to home, his hatred for Byl festered and grew.

“Doc’s death is haunting Byl,” says Waldemar. “Doc was more than just a colleague. He was Byl’s best friend, and the only person Byl could really be himself with, and could communicate with without effort.”

In the end of Season 3, Byl shot Adriaan dead, ensuring that he couldn’t return to torment them the way he did with Season 3 started. But now with Fritz out of the picture, Byl is strongly considering quitting the police force – and his teammates won’t like the idea because there’s always a new bad guy on the block.

Besides Byl, his team and the new killers they are tracking, there are some new characters coming into Season 4.

Frank Rautenbach plays Trotski. “He has good intentions in the sense that he wants to look after his daughter from his previous marriage, but for that he needs money and Trotski will take shortcuts when it comes to money – that is where his shortcomings play a role,” says Frank. Trotski gets involved with the series’ new villain (see more below), but it will cost him dearly in the end.

The formidable Sean Cameron Michael plays Die Byl’s new villain, Harold Vermeer. “Vermeer was born in Holland. He is a highly educated, super rich, and a successful and influential businessman who has easy access to the highest echelons of world governments. He spent time in Russia, where he was involved in the underground mafia, but he has made South Africa his home now. What drives him is power, control and he wants to take over the world – that’s only the beginning,” says Sean.

Harold sees Trotski as 1 of his pawns in his elaborate, evil plan. “Vermeer will use anyone to get what he wants. Manipulation and blackmail are weapons in his arsenal.” As the season progresses, Vermeer will draw Nicki’s and Byl’s attention and what happens next will make their struggle with Adriaan feel like a stroll in the park!

Amalia Uys plays Jo, a mysterious sharpshooter. “Emotionally she doesn’t show much. She also doesn’t see a lot of people, except her dad, André Verwey (Chris van Niekerk),” says Amalia. “She is fantastic in her work and that makes her focused, goal-orientated, and disciplined. And she has a strong belief in what is right and wrong; in her books, who the good guys and who the bad guys are. She is a soldier and her driving forces in life are justice, loyalty, and family. She also does have a softer side, and it’s when the antagonist gets too close to her soft spots that her full force kicks in and things get interesting,” hints Amalia.

New Criminals On The Loose

Season 4 has 8 episodes, and each case stretches over 2 episodes. Some of the serial killers include: A man who lures love stricken couples to the bushes and then slashes their throats (episodes 1 & 2 on 16 & 23 January); a serial killer who takes the law into his own hands and carves out his victims’ sins on their foreheads (episodes 3 & 4, 30 January & 6 February); and a serial killer who’s obsessed with the perfect human skin… and wants to use that skin to make himself a mask (episode 5 & 6, 13 & 20 February).

Ilse-Lee van Niekerk (Jessica in the Showmax series Troukoors) is seen as Liza, a child psychologist in episode 4 (6 February).

There is life after Adriaan. Captain Juan Stuurman (Marvin-Lee Beukes) tried to silence his demons with drugs in Season 3 after he was tortured by Adriaan in Season 2. Juan had to learn to walk again and battled an addiction with painkillers. Now in Season 4, though, things are looking up for him. He is married to Dr. Shani van Rooi (Trudy van Rooy), Doc Fritz’s assistant.

Captain Lena Evans (Lika Berning), a profiler, is also back and this time she is battling to find a balance between her love for her work and her dedication and devotion to her family.

Advocate Nicki Swanepoel (Milan Murray) also plays a key role this season. She is investigating a case involving state capture and the Russian mafia, and it might just be connected to the new villain the team is looking for.

Leon Kruger, actor and original head writer of Die Byl, succumbed to COVID-19 complications last year. Leon gave life to interesting and complex characters, from the investigative team to the serial killers and the villains.

“Leon had an enormous impact on my life and those of others with his big heart and the type of person he was,” says the producer Elmarie. “He was an incredibly fair person and saw all sides of an issue. It was a pleasure working with him as a writer and director.”

Amalia agrees. “I got to know him first for his brilliant text. He is an exceptional writer. I had the privilege of doing a few scenes with him and it was a feast working with him. He was soft and supportive.”

Waldemar also remembers him fondly. “Leon had a fantastic sense of humour. We understood each other very well and worked well together. Leon had a way of sharing his deepest thoughts and emotions with people without making a big deal out of it. Without a doubt Leon has put the most words in my mouth as an actor.”