Die Byl ends on a high 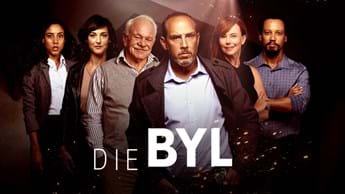 cliffhanger noun 1. A dramatic and exciting ending to an episode of a serial, leaving the audience in suspense and anxious not to miss the next episode.

Fans of Die Byl, kykNET’s (DStv channel 144) thrilling drama series are still recovering from the shock of the last episode of the third series aired on June 29, 2021. There were also some tears as the fate of one of the beloved characters hung in the balance. Is Byl going to lose another one of his colleagues and confidants? Binge Die Byl S3 as a Box Set on Catch Up now to find out.

kykNET viewers again made Die Byl S3 one of the channels’ most popular drama series and just could’t get enough. On kykNET’s Facebook page, viewers shared their experiences – sometimes with humorous effect. “The more nervous I get, the faster I crochet,” said Melissa van Dyk. “This must be one of the best series on kykNET at the moment,” wrote Neva van der Merwe. “I even forgot about my tea that got cold. Brilliant!” “kykNET and Die Byl: You know how to get a persons nerves racing. I love it! It is an excellent series,” wrote Judith Vlok.

Fans will be excited to know that the show has already been renewed for an even bigger and better fourth season. Premiere dates will be announced in due course.

Watch Die Byl on Catch Up or binge it from season 1 on Showmax.

KykNET (DStv channel 144) is available on DStv Premium and DStv Compact Plus. To get DStv or to upgrade your package, click here.