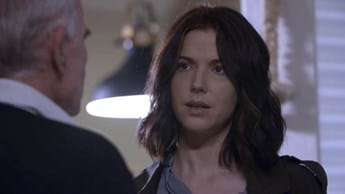 Jo is a sniper who works as a spy for the government. Her aim is to eliminate any threats to the country, and nothing is more important to her than that justice be served. But what happens when a sniper suspects that her latest target might be innocent? “Jo only kills guilty people – or that’s what she believes,” explains Amalia. But there’s something about Colonel Bob Nortier (Tim Theron, Frans in in the movie Klein Karoo 2, now on Showmax) that keeps eating away at her – even though she killed him with a single shot…

A search for the truth

Jo does nothing without first undertaking proper research. “She digs around in her target’s life and looks for evidence of their wrongdoings,” says Jo. With Bob, however, she couldn’t find anything, but she had to trust her boss and complete her mission. What Jo doesn’t know, though, is that baddie Harold Vermeer (Sean Cameron Michael) ordered the hit. Harold used his political connections to get rid of Bob because Bob came too close to exposing Harold and his evil deeds.

“Jo now finds herself with a dilemma because she can’t let the issue go. So she turns to her father, André Verwey (Chris van Niekerk, Hans in the drama series Fynskrif, now on Showmax), for help because just like Jo, André was a sniper in his younger days,” says Amalia. “She’s looking for answers and wants to know if she’s responsible for an innocent man’s death. And when she does eventually find the answers, she’s looking for, the baddie targets her father and then things get nasty,” Amalia warns.

It’s inevitable that Jo and Colonel Piet van der Bijl aka Byl (Waldemar Schultz) and his team’s paths will cross somewhere in the season. “He’s investigating all the people she’s eliminated,” explains Amalia. “So somewhere there’s bound to be a showdown,” she adds cryptically.

Amalia changed her appearance completely to play Jo. “Along with the make-up department and the director, Liesl Spies, we decided to cut my hair short and dye it darker so that I didn’t look like any of my previous characters. I even wanted to go so far as cutting my hair into a pixie cut, but my hairdresser refused, so we settled on a short bob. My costumes and make-up were also classic and minimalist,” says Amalia.

“It was great to delve into Jo’s psyche. I did as much research as possible on female and male snipers and soldiers, and spent long hours writing a backstory for her so that she could become a part of me. On so many levels, Jo is the complete opposite of me. I’m a people’s person and larger than life, so I had to undergo a complete metamorphosis to ‘become’ Jo.”

Amalia wields a Barret M82 .50 calibre gun in the show. “I did a training course beforehand and also worked with the guns on the set between scenes. I watched countless YouTube videos on sniper rifles,” explains Amalia. With the filming of the show (in 2021), Amalia became increasingly comfortable with the Barret M82 .50 calibre. “Often it felt like an extension of my arm,” says Amalia.