Klein Karoo 2 at the DStv BoxOffice 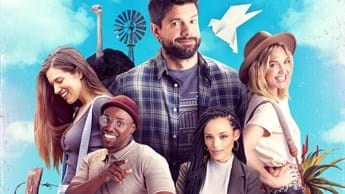 It’s been 10 years since we last saw documentary filmmaker Frans (Tim Theron) in the local romantic comedy Klein Karoo. Now he’s back with a crazy story in the DStv BoxOffice exclusive, Klein Karoo 2. And because it’s on BoxOffice, you and your family can enjoy this delightful holiday movie while you’re celebrating safely at home together.

While most of the Klein Karoo clan is back, there’s one notable absence. Cybil Ferreira (DonnaLee Roberts), who ended the original Klein Karoo movie as Frans’s fiancée, wasn’t able to return. We spoke with Tim about how they solved the missing fiancée problem, and about going back to Klein Karoo …

Tell us about it, Tim

What was it like to think about that time of your life again?

Klein Karoo was the very first film that my producing partner and Cobus van den Berg produced as Kaapland Films. It was an amazing time, but also a very stressful time, because we knew if that first movie wasn't successful, then there wasn't really much of a way forward for us. It probably will forever be one of the most special memories of working on a production. It was good going back and recapturing that magic. That’s how the first one felt – as if we, these very inexperienced producers, in some strange way bottled magic and got it out there.

Was it strange to think about your character, Frans, living his life in parallel to yours until you joined up again?

The moment we started talking about doing the 2nd movie, it was interesting going, “Okay, but where is Frans now?” I know where I am, and I know my life has changed. Between Klein Karoo 1 and Klein Karoo 2, I've had two kids. So that's been a massive change. It was a really fun part thinking, “So where is this guy now? How has his life been going? How's his viewpoint changed?”

This time you had Deon Meyer working with you?

Yes, Deon is also involved as a producer and part of our company (production company Scene 23). The one big part that he has to play is while we're developing the script. Deon looks at the script, looks at the story, and he gives some really amazing feedback in terms of making sure that the story works. It's a massive privilege, having someone with that kind of skill set to go to.

What's 1 of the insights that he had that really made you think?

It’s the way we started the film. We were really stuck because the first one wasn't set up for a 2nd movie. And, unfortunately, one of our lead actors from the first film, DonnaLee Roberts, couldn't be in this one because she was expecting her first child at that time. So how do we get it going and get it moving in a direction that people will respond to and also find plausible? We use the first 10-15 minutes of the film to kind of finish off the first movie in that story. And, in a dramatic fashion, propel our characters into a new story.

You’re a producer on the film as well, what did that translate to in practical terms?

I have days where I'm shooting and where I'm in front of the camera as well. My producing partners, Cobus van den Berg and Jorrie van der Walt, were on set, and they’d know to then take up the slack. But it's a lot about just reacting to issues that might come up. It can be anything as big as the action vehicle, that we're supposed to have on Saturday, has a flat tire and won't be on set when we want to start shooting. So that needs to be figured out. We've had actors that became ill and then you need to figure out what to do with the schedule. Every day had its own little challenges.

What was your favourite set from the film?

Definitely the big wedding from the final scene of the movie. Our department did so spectacularly well, creating this beautiful and magical set, precisely what we wanted for the end of the film. The little folded origami birds that were hanging from the trees… There were so many beautiful elements, but the time it took to fold and make those little birds and the attention to detail, was just amazing. I don't even think it was a day that they had to dress it. So they did it in a few hours. We were like, “This is more beautiful than most weddings we've been to. And these people didn't have even a fraction of the resources or time to get this done.”

What can you tell us about working with sheep?

We had a few scenes where we literally only needed the sheep in the background of the shots, but that's difficult enough. We literally had the farmers that supplied the sheep constantly herding the sheep to one side, running around, and then herding them back to make sure that they stay in the shot.

We might not get that lamb chase on screen, but it’s still a hoot watching the crazy action in Klein Karoo 2.

How to rent a BoxOffice movie for R40 on DStv