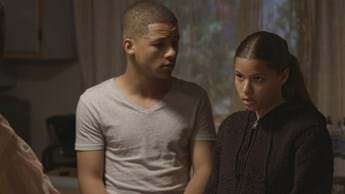 It was a dark day last year when the Galant family’s evil deeds and involvement in human trafficking came to light on the kykNET & kie (DStv Channel 145) telenovela Arendsvlei, after which matriarch Dorothy Galant (Ilse Klink) and her daughter, Angelique “Angel” (Chelsea Faith Thomas), fled under pressure. Angel’s life changed in the blink of an eye when she learnt the truth about her family and their criminal ways – and in the chaos, she was ripped away from her loving boyfriend, Daniel (Cantona James).

Daniel mourned for Angel for months, so when he hears a knock on the Cupidos’ door – where he stays – Angel is the last person that he expects to see…

“He is beside himself from shock,” says Cantona. “You can only imagine what must be going through his mind – a thousand questions – but above everything, he feels pure joy and relief because his Angel is back.”

Beatrice (Jolene Martin) and her mom, Aunty Gertie (Celeste Matthews), are just as surprised to see Angel and they listen intently when Angel tells them how she escaped from her mom. “Angel and her mom ended up in Istanbul (Turkey),” explains Chelsea. “Angel completed her matric there, and when she turned 18, she started plotting to run away from her mom. 1 day when Dorothy was out, Angel left her a letter stating she’s going home to Arendsvlei. Angel managed to get on a plane and flew back to Cape Town.”

Daniel is filled with admiration for Angel about her bravery and courage to get away, but Beatrice and Aunty Gertie are a bit more reserved in their reaction.

Shortly after Angel’s return, there is drama in the Cupido household. “Aunty Gertie makes it very clear that she doesn’t want Angel in her house,” says Chelsea. “The Cupidos have been through a lot the past couple of months, especially with Beatrice’s kidnapping in January. And to now offer a haven for a Galant who is part of a crime family can only put them in harm’s way again. And neither Aunty Gertie nor Beatrice is up for that.”

Daniel is devastated when he hears that the Cupidos want to kick Angel out, and it leads to a heated argument between him and Beatrice. “Angel is Daniel’s first and only true love,” says Cantona. “He can’t understand how they can drop her now, especially since they know how he feels about her and what she means to them.”

Beatrice and Aunty Gertie won’t budge and Angel has to leave, so Daniel makes a drastic decision: “He doesn’t want to lose Angel for a second time. Where she goes, he will go, and no one will stop him,” says Cantona. And guess where the 2 end up? In the villainous Ingrid/Wendy’s (Rehane Abrahams) house! “Wendy spreads her wings and embraces them, especially Angel,” spills Chelsea.

And so Ingrid starts spinning her web around Angel and she even lets Dorothy know where her daughter is. What lies will she feed Angel? And will she turn Angel against the Cupidos, and worse, against Daniel? “Only time will tell,” says Chelsea.

With every season of Arendsvlei, we meet new characters, especially new pupils joining Hoërskool Arendsvlei. At the end of January, we were introduced to 2 new students, Avukile (played by newcomer Aviwe Ngabom) and Ruby (Boudine Ballem, Chelsey in the soap Suidooster). They tell us more about the roles they are playing.

Avukile is 17 years old and failed grade 11. He recently joined the dance group at the school and now takes dance as a subject because he believes it will help him get his matric. Initially he had 2 left feet, but gradually, and with the support of his friend, he turned into a promising dancer – and now he is even a choreographer for the dance group. Aviwe (23) is proud to have his first TV role, especially since Avukile is the first Xhosa student in Arendsvlei. “I think he will quickly become a firm favourite with viewers. And there is a strong possibility that he will find love – and that makes things exciting,” the youngster says.

Ruby is also 17 and has been fighting to survive her whole life due to her different illnesses. Since her premature birth, she’s been battling with weak lungs, epilepsy, diabetes and an arm-long list of other ailments. Ruby also has a wheelchair – not because she can’t walk, but because she tires easily.

Her mom, Denise (Chantal Herman), is a single mom who makes sacrifices daily to help her daughter. And despite all the odds stacked against her, Ruby is completing her education at Hoërskool Arendsvlei. “She has a fighting spirit up to the point where she pushes me to give more of myself as an actor,” says Boudine (28). “I think she is tremendously brave and viewers will want to protect her at all costs.”