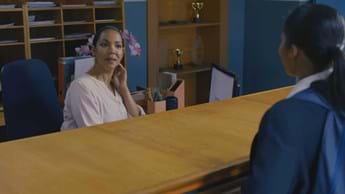 She’s been restless ever since she earned her matric certificate earlier this year. With one goal achieved, she wanted to set her next one, to do something with her qualification. Now the future is Elsa’s oyster. In early December, on a whim, she applied to study at the University of Kent in England – psychology no less! – and to her utter surprise, she was accepted, complete with a full bursary to cover her costs.

“Elsa can’t believe her luck,” says Roxanne. “She took a chance by applying and didn’t really think it would happen. But now it has basically fallen in her lap and she just has to go with it.”

Elsa jumps in and starts making plans for her studies overseas, but for now she isn’t sharing the news with her husband, Fred (Jeffrey Moss), and her daughter, Mielies (Kaylene Bergstedt), who just completed grade 12.

Elsa takes another chance and quits her job at the high school, much to the surprise of her boss, principal Beatrice (Jolene Martin). “All her overseas plans aren’t finalised, but Elsa wants more for herself than to just stay in Arendsvlei, or even in the country.”

Meanwhile, Elsa also starts thinking about her daughter’s future. “Elsa thinks Mielies can also study overseas and get a bursary, since Mielies isn’t sure yet what she wants to do. It will be a wonderful opportunity for Mielies. And now Elsa thinks that moving to England is just what they need to do. It’s all falling into place,” adds Roxanne.

With Christmas around the corner, Elsa is quietly planning their big move and she is ecstatic when her son, Vernon (Dillon Windvogel), who is already studying in England with a sports bursary at the University of Kent, comes for a visit and supports her plan wholeheartedly.

On Christmas day in Arendsvlei, Elsa breaks the news to her family. But while Vernon and Mielies are on cloud 9 about the announcement, Fred doesn’t share their enthusiasm. “He doesn’t want to do it,” says Roxanne. “He doesn’t want to know anything about it, but it’s not going to stop Elsa.” Shortly afterwards, Elsa and Mielies have an earnest conversation with Fred and after his initial reluctance, he finally relents and agrees to move with his family.

“It’s a bittersweet experience,” Roxanne says of her character’s – and the rest of the Booysens family’s – exit on the telenovela. “Since the Booysens joined Arendsvlei (in 2018) they were, to me, an example of a strong family that stands together despite challenges, like when Vernon was shot way in the beginning. They were pillars of strength for other characters in Arendsvlei and I’m really proud of that,” says Roxanne who has also been a director on the show.

For now, Roxanne is going to spread her own wings and see what is in store next for her career. But before she goes, she tells us that Jeffery will always be known as “Mielies’ dad”. “I remember I once asked Jeffery (Fred): ‘Jeffery, what do the public call you when they recognise you on the street?’ And he replied: ‘Well, I’m just Mielies’ dad!’ We both burst out laughing.”

When Kaylene Bergstedt started playing Mielies, she was just 15 years old. “I remember I got the role by accident as my friend wanted to audition, but was too scared to do it alone, so I tagged along,” says Kaylene. “In the end they liked me and my journey at Arendsvlei started. It has been an incredible experience.”

Kaylene’s favourite storyline was when her character was bullied by a fellow student in the first season (available on Showmax). “I could really relate to most of it.”

Working with Roxanne and Jeffrey, who played her on-screen parents, was a huge treat for Kaylene. “We had such fun on and off-screen and being surrounded by people that helped me and supported me meant so much to me. I feel like I’m leaving with so much more than I came with.”

Now that Kaylene has completed her own matric like Mielies, she is looking forward to studying hospitality, and hopefully further her acting career.