Inside ‘I Do’: the bush, flowers, and motorbikes for Lionel & Janice’s wedding 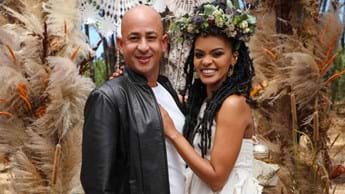 The road to love can take many interesting turns – especially on the kykNET & kie (DStv Channel 145) telenovela Arendsvlei. The show’s theme song does say “love and sorrow in Arendsvlei” after all! Janice (Crystal-Donna Roberts) and Lionel’s (Jody Abrahams) relationship has certainly had its ups and downs, which is why Janice originally said no when Lionel asked her to marry him back in February. “It wasn’t the right time to ask Janice,” explains Crystal-Donna. “They were fighting and getting married was definitely not a solution for the situation. Janice felt Lionel thought of it as a joke and that he couldn’t understand her point of view [that they shouldn’t get married then].”

Lionel was shattered when Janice refused his proposal so at the beginning of March, he went to Janice’s trusted Aunty Poppie (Vinette Ebrahim) for help. Aunty Poppie packed her bags there and then and moved in with Janice and Lionel, and with her support Lionel made a definite attempt to change and to become more serious about his relationship with Janice. It made Janice realise that maybe things may work out for them after all, and she started planning something very special that will make Lionel’s heart pump sweetness like a chocolate fountain this week!

Janice has been surprised by the changes in Lionel’s behaviour, which have made her realise that he does truly love her – especially after he recently sold one of his coveted and expensive leather motorcycle jackets to finance new hair dryers for Janice’s salon. “Janice was pleasantly surprised,” says Crystal-Donna. This sacrifice was the cherry on the cake for her in his renewed efforts with their relationship. So with help from Aunty Poppie, and Janice’s half-sister Ayesha (Megan Saayman) and mom Zuleiga (Natalia da Rocha), Janice started planning a surprise wedding.

“Lionel doesn’t have any idea what is coming,” says Jody. “He is as cool as a cucumber and doesn’t realise anything that is going on. Lionel always just carries on and goes with the flow and usually just accepts anything Janice tells him.”

Eventually it does filter through to Lionel that Janice and Ayesha are very busy with things, but when he asks her about it, cunning Janice claims that they are planning a surprise party for Aunty Poppie – and of course Lionel doesn’t question her any further on the flurry of planning.

Shortly after that, Lionel’s friends from his motorcycle club pitch up at his door. “He thinks he is going on an excursion with his pals. He doesn’t at all expect to arrive at his own wedding! Especially not after everything that happened the last couple of months. It’s a shock for him, but like we know Lionel, he just takes it in his stride,” reveals Jody.

“Janice has always been his one true love. He was really scared that he was going to lose her, so getting married to her makes him elated,” says Jody. Crystal-Donna says viewers will love the wedding. “I enjoyed the day between the bush, flowers and bikes so much. The wedding and Janice’s dress reminded me of my own wedding in 2015. I also got married outside in the bush and my own dress was very similar. It all just made it very special.”

“To plan and shoot a wedding for a show can take just as long as a real wedding,” says Cassandra Rowland, head of the Arendsvlei art department. “The writers give the framework and then the art department spends months to get everything ready, from the venue to the decorations, theme, colour scheme and outfits for the big day.”

The theme for the biker wedding was bohemian. “Janice planned it in secret and wanted it very special and intimate. She asked Lionel’s biker boys to bring him to the wedding, so we knew he wouldn’t be wearing a wedding suit. And it was perfect for the couple.”

The big day was filmed just outside Stellenbosch. “We often film scenes there – like it was the venue for Lee-Roy (Roberto Kyle) and Wesley’s (Craig Adriaanse) wedding in September 2021. We just decided to make Janice and Lionel’s wedding outside since it fitted the theme,” concludes Cassandra.