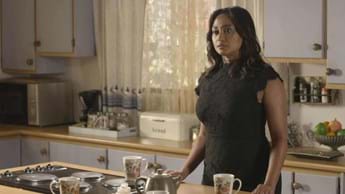 The Cupidos have had a simply dreadful start to 2022 on the kykNET & kie (DStv Channel 145) telenovela Arendsvlei. Beatrice’s (Jolene Martin) abduction at the end of January was the cherry on top. Aunty Gertie (Celeste Mathews), the family matriarch, is bone-tired and because things are just getting too much, she collapses. “Aunty Gertie bottled things up for a long time because she wanted to be strong for her family,” says Jolene. “But it seems to have done more harm than good – emotionally she is totally broken.”

Often when someone finds themselves in such a situation, they take time to re-evaluate their life and the time they have left. This leads to Aunty Gertie making a decision that directly concerns both her children and it causes envy, bickering and even a possible split in the family.

After Aunty Gertie fell apart in Beatrice’s arms, she was in hospital for a few days to get some much-needed rest. When she gets home, she calls a family meeting to have a serious discussion with them. “She realised that she isn’t young anymore and needs help. Therefore she is giving Beatrice her power of attorney,” explains Jolene. Thys (Sherman Pharo), Aunty Gertie’s son, is shocked that his mom is giving her trust to his sister, but he accepts it as to not upset his mom any more.

Shortly after the family gathering, though, Aunty Gertie and her husband, Johnny (Joseph Mitchell), head for Bormanshoek for a little getaway. Thys decides that it’s the ideal time to organise their garage and he discovers a box filled with papers. “He reads through the documents, and he sees his mom’s will. To his utter surprise, in it she leaves everything to Beatrice,” exclaims Sherman.

Thys is furious. He gives his sister the cold shoulder and vents to his friend, Lionel (Jody Abrahams), about his mom’s wishes. “Thys explains to Lionel how upset he is after he reads the will. He just can’t understand why his mom is letting Beatrice inherit everything. He has made peace with the power of attorney that’s been given to her, but why this too? Doesn’t his mom trust him at all?” asks Sherman.

After that, you can cut the tension between Beatrice and Thys with a knife. “Beatrice tries to keep things between them calm, but Thys is constantly angry. He can’t understand why Beatrice is being given it all. He feels everyone is ganging up against him,” says Jolene.

Things reach a climax and Beatrice packs her bags and moves out. “After everything she’s been through, she decides to move out if it will keep the family together. They’ve talked and talked and talked about the issue, but it doesn’t help and there doesn’t seem to be a solution,” adds Jolene.

Just like that, the Cupidos are torn in 2. And that might be the last straw for Aunty Gertie’s already fragile health…