Langes risks it all 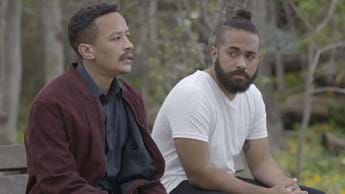 It cost Langes (Bobby Stuurman) a lot to put his old life as a gang member and criminal behind him in the Afrikaans telenovela Arendsvlei. But it was all worth it, because he is currently studying in the evenings to earn his Matric, he has a steady job and income at the Wendy House restaurant, and he has the love of his life, Debra (Kay Smith), at his side. But he’s going to risk throwing it all away… because Langes is on a mission to find his estranged younger sister, Eva (Devonicia Swartz).

Langes last saw Eva years ago before he ran away from home as a young boy. Now that he is a new person, his conscience is eating away at him that he must make right with Eva. Desperate for answers about where she could be, Langes returns to his old life at the end of November and puts out feelers in gangland to locate her.

When Debra finds out that Langes is mixing with that element again, though, she does something that could just make Langes sink deeper into his old life.

Bobby explains that Langes decided to leave his mother’s house because she was involved with drugs and dangerous men. “He wanted a better life for himself and left everything behind. His sister was still small, and he did not think of taking her with him at all.”

Since Langes started looking for Eva earlier in November, he has received information that she is currently staying with a man named Mario (Dean Balie)... his mom’s ex-boyfriend. “Mario is not a good man,” warns Bobby. “He has connections with Bompie (Jarrid Geduld), Langes’ former friend for whom Langes was an ally and hitman. And now Langes blames himself for his sister being caught in Mario’s claws.”

Langes wants to get Eva away from Mario with everything in him, but he does not know how, and this leads him to make a difficult decision: “He contacts an old friend of his in the gang world to help him with the search for Eva,” says Bobby.

But when his friend returns empty-handed, Langes’ own detective work pays and he finally finds Eva. “Langes is shocked when he sees Eva. He cannot believe it’s her, but he is delighted that he finally got to her,” Bobby reveals. But his happiness is short-lived because sister Eva is anything but happy to see Langes. “Mario made Eva believe that he is the best person to look after her and she is under the impression that Langes is dangerous. It’s a case of Stockholm syndrome,” says Bobby.

Devastated by what his sister thinks of him, and when his feelings of guilt just don’t want to go away, Langes takes drastic steps: He reaches out to Bompie and visits Bompie in jail (where he is currently serving his sentence for human trafficking) and he tries to persuade Bompie to convince Mario to let Eve go.

And that’s where Debra draws the line! “Debra has supported Langes all the way in his search for Eva, but she can’t accept what he is doing now,” explains Kay. “Debra doesn’t like this because she does not want Langes to be caught up in his old lifestyle, and she is upset that he didn’t discuss his visit to Bompie with her beforehand.” And because Debra has no time for more drama, she decides to end her relationship with Langes.

Back to the darkness?

The depth of Langes’ new obsession becomes clear when he shrugs off Debra’s walk-out. “His mission is still to get Eva away from Mario and he hopes that Bompie can help him, even if it means Langes must pretend to become Bompie’s friend and confidant again,” says Bobby.

Meanwhile, Bompie sends his spy – the very same Mario – to confirm Langes’ story that Langes does in fact want to become Bompie's pal again. “Langes and Mario have a conversation, and Langes soon realises that he won’t be able to get Eva so easily,” says Bobby. “Langes may just have to embrace his dark side again if he ever wants to see his sister again…”

card link
Back to News
Local 26 November 2021
Get your fists up, ladies!