The Dean of mean! 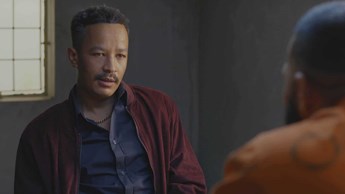 “The worst is yet to come,” warns actor Dean Balie. His character Mario has something wicked in store for January 2022 on kykNET & Kie’s (DStv channel 145) Afrikaans telenovela Arendsvlei. “What had already played out on screen is but the tip of the iceberg when it comes to Mario and the illegal activities and cruelties he is capable of in the gang world of the Cape. He craves control and will spiral if that is taken away from him.”

If there’s one person who should be on red alert, it’s Langes (Bobby Stuurman), because if Mario finds out that Langes has been lying to him about what his true intentions are for working for Mario, all hell is going to break loose. Someone may even suffer a painful death…

In case you missed an episode or three, Langes became Mario’s right-hand man to get closer to his estranged younger sister, Eva (Devonicia Swartz), who Mario groomed during her early teens to become his wife.

Mario was in a relationship with Langes and Eva’s mom years back, but their relationship became toxic and Langes’ mom got involved with drugs. The young Langes had enough and ran away, abandoning his sister and leaving her with Mario. Mario eventually replaced Eva’s mom with Eva herself. Leaving Eva behind has been Langes’s biggest regret. He is now trying to set things right by getting Eva away from Mario. But it’s easier said than done…

“Langes introduced himself as Winston (Langes’s first name) to Mario in order to win Mario’s trust and become his right-hand man. Langes had to go back to his dark side by picking a fight with an enemy of Mario’s and nearly killing him,” explains Dean. “That showed Mario that Langes could follow orders and it bred loyalty, which is of great importance to Mario.”

In January, viewers are in for a rough ride once Mario finds out that Winston and Langes are the same man, and that Winston/Langes is Eva’s brother, who wants to take Eva away from him. “Control is everything to Mario,” says Dean. “He takes pride in always being aware of anything that is happening in the community of Arendsvlei. Not knowing that Langes was Winston is actually quite embarrassing for Mario!”

“Earlier in the story Mario said that Winston looked familiar, but he couldn’t place him. Now the picture is going to get pretty clear, and then revenge is going to taste oh so sweet… or will it?” adds Dean.

Mario starts planning Langes’s murder, but whether Langes will die is another question – especially after Eva starts realising what’s going on and stands up to Mario. “Eva is Mario’s biggest weakness,” says Dean. “His psychological hold on her keeps her in her place and makes her think that she loves him. It makes her believe that without him she will have nothing and perish. But as soon as she becomes independent and starts seeing Mario for who he really is – a thug – Mario will lose all control over her. He can never let that happen.”

It looks like we’re about to see another side of Mario.

Viewers have already seen another side of Dean. Earlier this year he made quite the impression on viewers in his role as the foreman Jan-Jan in the captivating kykNET (DStv channel 144) drama series Nêrens, Noord-Kaap.

“It was a lovely experience, and I am so excited that there is going to be a second season,” says Dean. “Jan-Jan is a true salt-of-the-earth kind of guy. He’s not book-smart, but he knows how to work with his hands and with the land.”

Being the foreman of the farm Nêrens is his pride and joy, and being born and raised on pa Lourens’s (Frank Opperman) farm made him feel like he was part of the family even though he wasn’t a blood relative. “I know some viewers would have liked a twist, like that secretly Lourens was Jan-Jan’s biological father, but that is not the case,” he says.

“I think there are a lot of other possibilities and unresolved storyline directions that can be explored in Season 2.”