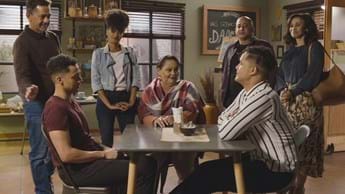 Muriel is a force to be reckoned with, and while she has softened since her first appearance in 2019, nothing will stand in her way when it comes to giving her grandson the best day of his life!

Alas, Muriel is so caught up in the spectacle that she forgets about honouring the couple’s wishes.

When viewers met her for the first time, Muriel lived in Clanwilliam, but worked in the Middle East for Nurses Without Borders. Her son, Lionel, and his ex-wife, Ronel (Melanie du Bois), moved to Arendsvlei where Ronel took up a teaching position at the school and Lee-Roy became a pupil. They later split up, and Lionel rekindled his teenage relationship with former sweetheart, Janice (Crystal Donna Roberts), who had given up their baby for adoption way back when, rather than become a teen mom when Lionel chose Ronel over her.

Once they were back together, Lionel and Janice moved back to Clanwilliam, where Muriel made Janice’s life a misery by pampering her “Baltjies” as she affectionately calls Lionel, and ganging up with him against her. Muriel also wrecked Janice’s beauty salon business and chased her off to the garage! Somehow, though, the relationship survived and Lionel and Janice later returned to Arendsvlei to live peacefully – aside from the occasional visit from Muriel. She and Janice have since resolved to bury the hatchet for Lionel’s sake. But no mistake the family was bracing itself when Muriel returned in late August, in time for some meddling and wedding planning.

Lionel and Muriel conspire behind everyone’s backs about the wedding planning. They’ll stop at nothing, even spying on Ronel’s plans in an effort to outbid her and win the race to organise the wedding.

While Wesley and Lee-Roy are in two minds about the wedding planning pitches, they do not want to hurt anybody’s feelings, and eventually they announce that everyone will be planning their wedding as a team, after Ronel and Muriel reach an unexpected compromise.

But there’s a twist in the tale and viewers will have to wait and see how it unfolds, especially when Lionel has his own idea to make the wedding special – an idea that nobody is enthusiastic about.

During this season’s final episodes, the wedding team try to find a solution to the latest crisis and Lionel feels left out. The wedding day is celebrated over two episodes.

Grandmother of the groom

The wedding is held on a wine farm and looks like a real fairy-tale and the wedding couple arrived in a horse drawn carriage.

It’s the biggest wedding of the year, as the wedding teams pull out all the stops. And since there’s no bride to upstage, Muriel rocks up in a massive white dress. She makes sure that everybody knows she is Lee-Roy’s grandmother, and this is the event of the year.

What an entrance! And what an exit, for one of South Africa’s most beloved performers.

Shaleen said in an interview after her first appearance in Arendsvlei more than two years ago, that it was a privilege to be part of the show. “I think it’s very important to represent the coloured community in its purest form. And to be part of something like that, is a blessing.”

It was very much a mutual love. She is still sorely missed by her Arendsvlei colleagues and South Africa as a whole. Melanie du Bois said simply after Shaleen’s death, that she was like a mother to all the actors.

"What Shaleen represents is so large, and the magnitude of who she was professionally and personally is so overwhelming that I don't have the words that could ever contain her," says award-winning actor, writer and director Quanita Adams, who played Laetitia in Arendsvlei.

Former Miss SA Jo-Ann Strauss said on Twitter: “Seeing her face on screen made me believe in the power of my own dreams. She was an icon who will always be the guardian angel of arts for all.”