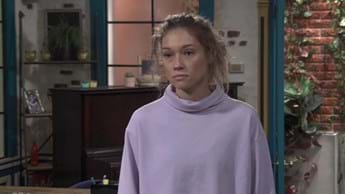 Bibi (Stephanie Petersen) and Jordan’s (Theodore Jantjies) wedding party on Friday, 19 November was a wonderful, festive day. But it ended on a bitter, painful note for cheerleader Ivy (Tené Minderon) when she was sexually assaulted in her flat.

Initially, Ivy didn’t want to report the incident to the police, but her boyfriend, Ronnie (Donovan Petersen), managed to convince her to open a case. And after the news of her traumatic experience spread, the online news site SinBin published a story about her nightmare, and now as other women come forward to share their stories, the rugby community rises up against the serial rapist in their midst. Ivy is not alone.

Tené says that there were numerous reasons why Ivy didn’t want to go to the police originally – thoughts and feelings that the rapist’s other victims might share. “Ivy is ashamed about what happened, and she was scared about the questions the police were going to ask. She also thought that even if she were to report the incident, the police wouldn’t do much to find the guy,” explains Tené.

“Ivy also didn’t want everyone to know what happened to her, because she doesn’t want people to feel sorry for her. So in the beginning, she only told her good friends, Liam (David Johnson) and Candice (Claudia Jones).”

Ronnie was furious when Ivy confided in him, though. “He wanted to take action immediately. He feels that the culprit must be found and he must pay for what he did,” says Donovan.

After SinBin publishes the article, other women come forward revealing that they had a similar experience. SinBin journalist Jana (Juanita de Villiers Velts) and her editor, Pine (Gerald Steyn), soon find video recordings of what happened that night. But is that enough to catch the criminal responsible for these women’s emotional turmoil? And is Ivy emotionally strong enough to work through what happened to her now that she’s in the spotlight?

Ivy’s storyline goes hand-in-hand with the 16 Days of Activism Against Violence Against Women & Children movement, which starts Thursday, 25 November, according to Soné Combrinck, executive producer of the soap. “We decided to use Getroud Met Rugby as a platform to make viewers aware of the gruesome, violent deed that doesn’t only affect the victim, but also shakes a whole community to its core.”

Keep watching as Getroud takes their hunt for justice for Ivy to our screens this December.

Watch Getroud Met Rugby, Mondays-Fridays on kykNET (DStv channel 144) at 18:00 or on Catch-Up