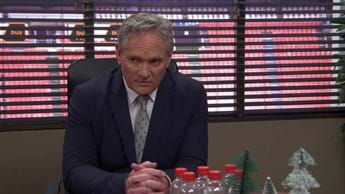 All eyes have been on Schalk Brand (Johan Scholtz) since he took over as CEO of the Stryders rugby team – after conniving Bart (Pierre Breytenbach) landed himself in prison, on kykNET (DStv channel 144) Afrikaans soap Getroud Met Rugby. The Stryders don’t need any more bad publicity, but Amanda (Natasja Jacobs) and her new ally, Matt (Sean Brebnor), are gunning to get Schalk fired – and they won’t stop until they get what they want.

Confidential information about the rugby team and their sponsors has leaked for a second time, and now Matt and Amanda are blackmailing Schalk.

“Schalk has to choose between the devil and the deep blue sea – and his back is against the wall,” says Johan.

Last month, ruthless Amanda tried to take over Kristien’s (Marlee van der Merwe) job as Stryders head of publicity by leaking sensitive info about the Stryders via an anonymous email to the news website SinBin. But her plan boomeranged when their other colleague, Lienkie (Mandi du Plooy-Baard), figured out that Amanda sent the mail. Schalk gave Amanda a warning – and he will shortly regret not firing her on the spot.

While Amanda isn’t actually responsible for the second information leak, she is quick to use it to her advantage. The Stryders lose another sponsor due to the leak, and it looks like a rugby council member may be responsible for making the information public. Now Amanda tells Schalk that she will spill the beans on who that council member was, unless Schalk coughs up a wad of cash to make her keep the secret. “Schalk has to pay them a huge amount or they will make it public and cast the Stryders in an even worse light,” adds Johan.

Johan explains that Schalk has always been the moral compass for the Stryders. “It irks him to his core that Matt and Amanda are putting him in this position. Initially he doesn’t know whether he should comply with their demands, but then he realises he has to, for the sake of the Stryders’ future.”

With a heavy heart Schalk eventually agrees to pay the blackmail money, and it’s not long before his conscience starts knocking. “But he realises that he didn’t have a choice. And his life partner, Jana (Juanita de Villiers Velts), also assures him that everyone knows he is a man with integrity and they won’t judge him for what he’s done.”

Meanwhile, Kristien is growing suspicious of Schalk and Amanda talking in hushed tones and their secret meetings. We don’t know what could happen if she gets wind of the blackmail. “Hopefully the truth will triumph,” Johan says with surprising optimism. He’d best hope that the public will be as forgiving as Jana thinks they will be…

Watch Getroud Met Rugby, Mondays-Fridays on kykNET (DStv channel 144) at 18:00 or on Catch-Up