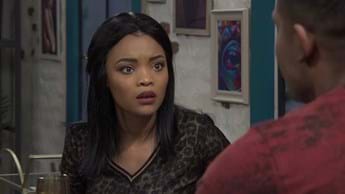 Candice (Claudia Jones) and her Stryder husband Liam’s (David Johnson) lives became a nightmare a couple of weeks ago in the kykNET (DStv Channel 144) soap Getroud Met Rugby when a stranger shot Candice outside the local hangout pup Pottie’s. The shooter wanted revenge on Candice for talking about his ex-wife on Candice’s talkshow Klits En Klets.

Candice survived, but shortly after the couple had to come to terms with another shock: the bullet went through Candice’s womb and that means she’ll never be able to fall pregnant. And now Candice has decided – to everyone’s astonishment – that she wants to talk to the man that took so much from her…

At peace with fate

Claudia says that Candice was only too grateful to be alive. “After the trauma sunk in, she realised she could’ve died.” And the news that the bullet damaged her womb and that she’ll never be able to bear children of her own, was more upsetting to Liam than for her. “Candice never really wanted kids; she wants to focus on her career. And now she feels the decision has been taken out of her hands in a way and she’s made peace with it. But Liam desperately wanted to start a family,” Claudia elaborates.

Liam tries to convince his wife to stop her show because she tackles such controversial matters. But she won’t let 1 man’s misplaced rage succeed in silencing her. “Candice believes the show must go on. She feels it’s popular and she will disappoint her viewers when she stops, and she doesn’t want to run away.”

After she’s discharged from hospital and tells Liam she wants to do an interview with her shooter, it catches him completely off guard. “Liam just can’t understand why she wants to talk to someone that did something like this and that wanted to kill her,” adds David.

But Candice thinks it’s a good idea. “She thinks a lot of people get shot daily and now she has the opportunity to confront him, in jail, look him in the eye and ask questions,” says Claudia.

Silencing the voice in her head

Liam tries with all his might to stop Candice from doing the interview, but all his attempts fail miserably. “And during the interview, the man tells Candice he blames her for his life falling apart after the show,” Claudia adds.

“Candice feels good after the interview. She thinks it was insightful and she now has more peace of mind.” But the atmosphere between her and her husband is tense and uncomfortable. “Liam is convinced Candice isn’t dealing with her trauma. She’s carrying on like nothing happened and like she wasn’t on death’s door. She actually hardly talks about the incident. Her work is her escape from reality,” explains David.

Candice keeps assuring Liam that she is totally fine. “Candice really just wants to move on with her life. She wants everything to be normal and wants to work through everything in her own way and on her own terms,” says Claudia.

But everyone, especially Liam, starts wondering when reality will sink in and if Candice will be strong enough to face it and deal with it. Candice can’t hide behind her show forever…

Kids, whether you want them or not

While Candice is talking through her trauma and setting down to not have kids, Nesie (Melissa Massyn) and her husband, Buks (Adriaan Marias), become instant parents when a teenage relative named Petro (Méla Swanepoel) temporarily comes to stay with them.

“Initially Nesie is reluctant to take her in; she realises caring for a kid is a huge responsibility and comes with its own set of problems – especially a kid that comes from a household with a lot of difficulties,” says Melissa. But when Nesie hears that Petro’s mom is in a rehabilitation centre, her soft heart melts and they take Petro under their wing.

“From the onset Nesie realises that Petro isn’t really disciplined, and she will have to set boundaries.” Petro doesn’t listen at first and fights her new guardians all the way, but with Buks by Nesie’s side, they slowly win her over. “Even though Nesie doubted her motherly skills at first, she realises through this journey that she won’t be a bad mom,” adds Melissa.

But don’t get too relaxed. Problems arise sooner than later and Buks and Nesie will be facing a whole new set of challenges.