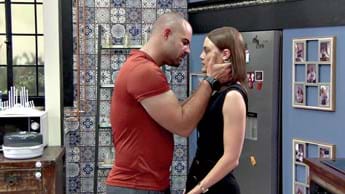 Love comes in all forms on the kykNET (DStv Channel 144) soap Getroud Met Rugby, but viewers know not to expect their favourite characters to skip off into the sunset, pumping out hearts and flowers. Where love goes, trouble is sure to follow. 3 pairs are finding out just how true that is this month: Simon (David Louw) and his ex-fiancée, Lulu (Ansu Visser); married couple Candice (Claudia Jones) and Liam (David Johnson); and newly obsessed teen lovebirds Petro (Méla Swanepoel) and Johan (Dirk Jacobs).

Simon decided on Valentine’s Day that he couldn’t hide his feelings for his ex-fiancée, Lulu, any longer, and he kissed her. But even though Lulu kissed back, her ecstasy soon turned into fury at Simon and herself. Lulu is kicking herself. “She worked so long and hard to not like Simon anymore. He really hurt her last year when he dropped her like a hot potato to reunite with his ex-wife, Renate (Christel van den Bergh),” says Ansu. “Lulu feels all her hard work was for nothing if she starts falling for him again.”

Meanwhile, Simon makes his feelings clear: he wants her back with all his might, even though she is engaged and her wedding to the farmer Nico (Pietie Beyers) is around the corner.

Lulu, Simon and Nico – who is vaguely aware of the undercurrent of feelings between Lulu and Simon – have talked a lot the past couple of weeks about how they are going to make their somewhat weird situation work. Simon is the father of Lulu’s baby, Anja (Kiara-Lee Brits), so he will always be in Lulu – and therefore Nico’s – life. Initially Nico was perfectly content to get Simon as part of the Lulu-package, but now he is growing concerned – especially when he learns that Lulu kissed Simon.

Lulu is racked with guilt about the kiss. “She is in denial about her feelings for Simon. She feels she can’t trust him and that he doesn’t keep his word. What happens if she leaves Nico for Simon because she listens to her heart, but then Simon ditches her again in the future? She also knows it will shatter Nico if she cancels the wedding. Nico thinks Lulu is the love of his life.”

Ansu adds that Lulu knows that, on paper, Nico is the right match for her. “But on the other hand, she feels it’s not fair to Nico to carry on with their relationship if she still has feelings for Simon. Her heart just doesn’t belong to Nico 100 percent.”

Even though the gullible Candice always sees the silver lining, dark clouds are now forming around her. Her nightmare started about 3 weeks ago on her talkshow, Klits & Klets, when she chatted to a woman who left her husband. The woman’s ex-husband was so disgruntled with his former wife spilling everything to Candice, that he shot Candice. It was a mere miracle that Candice survived, although the bullet went through her uterus. As a result she will never be able to bear children.

Then she gets more news: her shooter – who gave himself up and was in jail – has committed suicide. “All these things awake a stirring in Candice about a person’s psyche and what influences one’s decisions have,” says Claudia. “But Candice doesn't want to leave things there. Now she wants to talk about everything that happened as well as her personal turmoil on her talk show.”

Candice’s husband Liam’s concern about his wife’s wellbeing grows daily, especially because he feels she is putting herself in danger again. When he learns that Candice wants to have coffee with the shooter’s ex-wife, he wants her to drop the whole thing. “Candice feels partially responsible for everything that happened and she wants to give the other woman an opportunity to also talk about her feelings with the public,” says Candice. And Liam is not going to stop her – Candice is far too stubborn.

But when Candice meets the woman, whose call started the whole drama, she lashes out at Candice about the ugly aftermath of their initial interview. “Candice expected it in a way and decided she will not let this woman’s negative feelings be projected on her.”

At this point, Candice believes that she is handling all the trauma quite well and that she has made peace with everything, but then she starts getting anxiety attacks. “She realises that she can’t turn her back on her emotions, and she will have to get a councillor to help her.” Liam supports her all the way, but Candice will have to walk the long route to healing on her own – and it won’t be without complications. And it seems that Candice will also continue with her talkshow, even though it has cost her her fertility and threatens her stability and sanity.

Happily married couple Nesie (Melissa Massyn) and Buks (Adriaan Marais) have their hands full with Petro (Méla Swanepoel), Nesie’s cousin’s teenage daughter. Petro has been placed in their care temporarily since her mom is in a rehabilitation centre and her dad is in jail. First, Petro runs away, but after they find her they have a new worry: Petro meets Johan (Dirk Jacobs), Blitz (Werner Coetser) and Lienkie’s (Mandi du Plooy-Baard) teenage son, and the sparks between them fly from the get-go. Lienkie is also concerned about the blossoming love between her son and Petro, says Mandi. “Lienkie doesn’t think it’s fitting that the teenagers get serious at their age.”

Meanwhile, Nesie and Buks can’t help but grow more attached to Petro daily. “They are starting to feel like a family,” says Melissa. But soon Petro’s mom will want her daughter back. And what will happen then to the instant family and the serious teenage love?